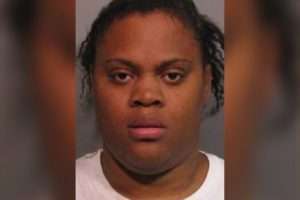 (NEW YORK POST) – A Louisiana mother was arrested for throwing two of her young children off a bridge, killing one infant, cops said.

Ureka Black, 32, was slapped with second-degree murder and attempted murder after she allegedly tossed her two boys into the waters of Cross Lake on Friday, the Shreveport Police Department announced on Friday.

Black flung her children into the lake from either the Cross Lake Bridge or the low bridge at South Lakeshore sometime before 11 a.m. on Friday, authorities said.

Police received a report of an infant boy’s body floating in the lake near the Cross Lake Bridge around 10:52 a.m., and deployed its marine unit. The child was dead upon arrival.

A second child, a 5-year old boy, was found floating moments later. The child was transported to the Louisiana State University Medical Center but is expected to survive, police said.

Several agencies rapidly began searching the waters for Black’s third child, who was later found safe in a different location.

“My heart is just so broken with this event that has occurred today,” Wayne Smith, Substitute Chief, told KSLA.

Black fled the scene in a gray Dodge Caravan with Texas plates, and officials put out a BOLO — be on the lookout– warning. She was stopped and apprehended near the Texas border by Waskom, Tx. police officers after she was spotted at a rest stop.

“This is a tragedy,” Shreveport Sgt. Angie Willhite said. “We ask for prayer for the family and children. Pray for law enforcement officers who’ve been out here all day, firefighters, dive teams, been a multi-agency effort. There is no happy ending for this.”

Law enforcement officials organized a drive-by birthday party for Black’s five-year-old son outside of LSU Health on Saturday, where members of the community sent the child their birthday wishes.