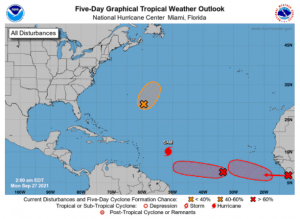 (ORLANDO SENTINEL) – Hurricane Sam continues dancing Monday morning as a powerful category 4 storm and seems to have partners joining it on the Atlantic basin dance floor in the forms of three other disturbances.

The seventh hurricane of the year has maximum sustained winds of 130 mph and is crawling northwest at 8 mph, according to the National Hurricane Centre’s 5 a.m. update. Sam’s reach is relatively small, with its hurricane-force winds reaching 30 miles from its core and its tropical-storm-force winds extending 105 miles. Sam is 880 miles east-southeast from the northern Leeward Islands. The storm is forecast to decrease in forwarding speed over the next day.

It is still unclear whether Sam will affect Florida or any part of the United States.

However, Sam should generate swells that will reach the Lesser Antilles Monday and impact the islands for the next several days, the NHC said.

Meteorologists think Sam’s power has peaked, but Atlantic conditions should allow the storm to maintain major hurricane strength over the next couple of days. Sam’s impressive inner core deteriorated overnight, likely due to some dry mid-level air impinging on the western side of the circulation, the NHC said.

Sam will likely remain a major hurricane until next week.

A hurricane hunter aircraft is scheduled to check out Sam later today.

To the northwest of Sam, an elongated area of low pressure, previously known as Peter’s remnants, is located a few hundred miles southeast of Bermuda. Atlantic conditions are ripe for development, and Peter could briefly reform into a tropical depression again Tuesday. The disturbances have a 50% chance of reformation in the next two to five days.

Further east, disorganized showers and thunderstorms are associated with a broad area of low pressure located several hundred miles southwest of the Cabo Verde Islands. This system has a 30% chance of developing in the next hours and an 80% chance in the next five days.

In addition, another tropical wave is expected to move off the African coast by early Monday. It should move into a favorable Atlantic environment for development, the NHC said. The wave is forecast to move west between 10 to 15 mph. It has a 20% chance of developing in the next 48 hours and a 70% chance of forming in the next five days.

So far, the 2021 Atlantic hurricane season with 19 named systems, including Teresa, is the third most active behind 2020′s record year and 2005. Sam is the seventh hurricane to form so far.

The next name on the list is Victor, with only Wanda left before the NHC will begin using a new set of alphabetical names chosen for busy hurricane seasons. Only 2005 and 2020 ever had to venture beyond the initial list, but the storm names were given Greek letters such as Tropical Storm Alpha in previous years. Confusion in similar-sounding Greek letters, such as Eta and Theta, though, led to the shift.

If 2021 reaches the new alphabet, the first named storm will be Adria.

The hurricane season runs through Nov. 30.