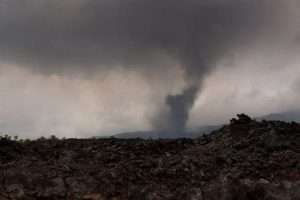 (CMC)— The Seismic Research Centre of the University of the West Indies (SRC-UWI) says there is no evidence that the Eastern Caribbean is under threat of a tsunami following the eruption of the Volcano Cumbre Vieja in the Canary Islands.

In a statement posted on its website, the SRC-UWI, while the eruption is currently in progress, the Instituto Volcanológico de Canarias (INVOLCAN) is the official volcano monitoring agency for La Palma.

“Although tsunami generation is a well identified risk near volcanoes, there is no scientific basis to indicate such hazard at long distances. Even the most catastrophic scenarios recorded in history, such as Santorini (Greece) or Krakatoa (Indonesia), have produced only localised damage,” it said.

“There is currently no evidence to suggest that the Eastern Caribbean is under threat of tsunami from this eruption. The Pacific Tsunami Warning Centre (PTWC) issues international threat information to countries of the Pacific Ocean and Caribbean and Adjacent Region,” the SRC-UWI said without indicating whether or not it had been forced to issue the statement because of concerns in the region or as a result of information being posted on social media outlets.

Meantime, in its latest bulletin Tuesday regarding the La Soufriere volcano in St Vincent and the Grenadines, the SRC-UWI said seismic activity has remained low since the tremor associated with the explosion and ash venting on April 22.

“Current activity is consistent with a period of unrest after an eruption. This can continue for weeks to months. While volcanic activity has been on a decline, there is the continued presence of near surface hot spots, daily seismic activity and persistent degassing,” it said, adding that measurements of the sulphur dioxide (SO2) flux at La Soufrière were carried out by boat off the west coast earlier this month and that several traverses were completed and yielded an average SO2 flux of 207 and 262 tons per day respectively.

The SRC-UWI said that visual observations on September 19 indicate no major changes have occurred in the crater since the end of explosive activity on April 2l.

“There is a small, but not insignificant, possibility that magmatic activity might restart, should there be an influx of new magma from depth. The volcano is at alert level yellow.”

Meanwhile, the SRC-UWI has confirmed that an earthquake with a magnitude of 4.1 occurred near the islands of Martinique, Dominica and St Lucia late on Monday.

It said that the quake, which had a depth of 10 kilometres (km) was felt 70 km east north east of Fort-de-France in Martinique, 100 km north east of Castries, the St Lucia capital and 118 km south east of Roseau in Dominica.

There were no immediate claims of injuries damages linked to the earthquake that occurred at 5.22 pm (local time) on Monday.