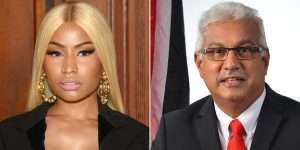 (THE HILL) – The Health Minister of Trinidad and Tobago shot down claims made by rapper Nicki Minaj this week that a friend of her cousin in the country had experience adverse side effects after receiving a coronavirus vaccine.

“One of the reasons we could not respond yesterday in real time to miss Minaj is that we had to check and make sure that what she was claiming was either true or false,” Terrence Deyalsingh said during a press conference on Wednesday. “Unfortunately, we wasted so much time yesterday running down this false claim.”

Deyalsingh said as far as the government there knows, “there have been no such reported either side effect or adverse event.”

Minaj, in a string of tweets on Monday, revealed she had recently contracted the coronavirus and has opted not to be vaccinated because, she claimed, of the experience her cousin’s friend allegedly had.

“My cousin in Trinidad won’t get the vaccine cuz his friend got it & became impotent. His testicles became swollen. His friend was weeks away from getting married, now the girl called off the wedding,” Minaj tweeted. “So just pray on it & make sure you’re comfortable with ur decision, not bullied.”

“We take all these claims seriously, whether it is on social media or mainstream media,” Deyalsingh said. “As we stand now, there is absolutely no reported such side effects or adverse event of testicular swellage in Trinidad … none that we know of anywhere else in the world.”

Chief White House medical adviser Anthony Fauci also dismissed Minaj’s claims when asked about them during an appearance on CNN on Tuesday.

“She should be thinking twice about propagating information that really has no basis except a one-off anecdote, and that’s not what science is all about,” Fauci said.