Trinidad: Boy, 4, Mauled To Death By Dog While Visiting Granny 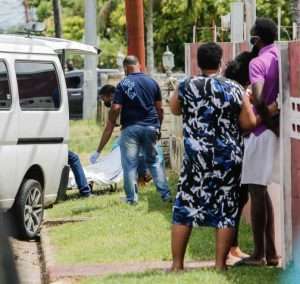 (CNC 3) – What was supposed to be quality time with his grandmother, ended in the violent and bloody death of four-year-old Amaziah Lewis of San Juan on Saturday after he was mauled by a Rottweiler.

According to eyewitnesses and relatives, Lewis came with his three siblings to Savannah Drive, Tacarigua where his 67-year-old grandmother was the caretaker of a home, in the absence of its owner, when the Rottweiler dog broke out of its kennel. The dog immediately took aim for little Amaziah, who it spotted in the yard at the time.

Construction worker, Rekesh Boodoo was working upstairs at a neighbouring house and had a bird’s eye view of the horrifying incident as it unfolded just after 11 am.

Boodoo said he and the friend ran immediately to the child’s aid, jumping the wall with a ladder and chasing the dog off with scrap pieces of wood. He said, they grabbed a bleeding Lewis and jumped over the wall to safety.

“That was it there… the child was breathing when I bring the child you know- breathing, gasping for breath. Is about 20 minutes to half an hour the child lie down on the (expletive used) ground there,” he said.

“You wouldn’t like to see that experience. That was horrifying. Serious. The dog wasn’t let going the child.”

He said the ambulance took about an hour and a half to arrive on the scene and Boodoo was visibly upset about it. However, he admitted they may not have been able to save the four-year-old.

“That kinda bite, you have no saving there,” he lamented.

Boodoo said the police were the first on the scene and, according to him, had no choice but to put down the animal.

“The police come and kill the dog. About 20 shots they deal out. Run down the dog and shoot down the dog. They had was to kill the dog because the dog running right around looking to find…the next two children,” he said.

Little Amaziah’s step-aunt, Rechaeline Stewart said it was the children’s first time coming over to Tacarigua and meeting the dog. She said it is believed Lewis thought the dog wanted to play because he’s accustomed to dogs where he lives in San Juan. However, she said her mother (Amaziah’s grandmother) was blaming herself for the incident.

“It’s not her fault but the children were left in her care so anybody would feel a sense of responsibility if something like that happen you know?” Stewart said.

“The mother of the child is not in any way, form or fashion upset or holds her responsible for it because it could have happened to my two (children) if they were here and she did take the necessary precautions as in penning up the dog and making sure the dog was secured and still telling them (the children) to stay inside.”

Shortly after Guardian Media arrived on the scene, Lewis’ mother was seen leaving the home- her vest covered in her son’s blood.

She nor Lewis’ step-father were in a condition to offer much by way of comment to the media as they were visibly traumatised and clearly trying to make sense of the horrific tragedy which occurred.