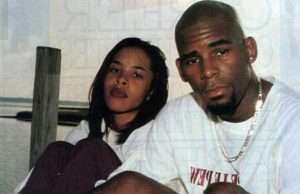 (NEW YORK POST) – R. Kelly sexually abused late singer Aaliyah when she was in her early teens, an accuser testified in Brooklyn court on Monday.

The accuser, a backup dancer for Kelly referred to as “Angela,” said she walked in on the disgraced pop star giving oral sex to Aaliyah in 1992 or 1993 – when Aaliyah would’ve been 13 or 14, Vulture reported.

Angela said she and another girl went toward Kelly’s bedroom in the back of a tour bus with the goal of performing a prank and cracked open the door.

“I saw Robert and Aaliyah in a sexual situation,” Angela said, according to Vulture. “It appeared he has his head in between her legs and was giving her oral sex.”

Angela said she quickly closed the door after witnessing the alleged assault, The Huffington Post report. She never spoke to the disgraced singer about the incident, she reportedly said.

Kelly, who would’ve been in his mid 20s at the time. illegally married Aaliyah when she was 15 and he was 27 because he thought she was pregnant, according to previous testimony.

Angela, who is the 10th accuser to appear in court, said she had a sexual relationship with Kelly herself — beginning when she was about 14 or 15, the reports stated.

Also Monday, Kelly’s longtime assistant, Diana Copeland, testified that the music star once asked her to change into a robe to demonstrate she was not wearing a wire.

“He could get pretty heated,” Copeland said.

Kelly – real name Robert Sylvester Kelly, 54 – faces multiple accusations of sex crimes and sex trafficking. The multiplatinum Grammy-winning singer of “I Believe I Can Fly” has been portrayed by prosecutors as a man who used his fame to sexually exploit young women, girls and boys.

He has been accused of bribing an official to get a fake ID for Aaliyah so they could be married and he could block her from testifying against him. Aaliyah, who died in a plane crash in 2001, had allegedly told Kelly she was pregnant.