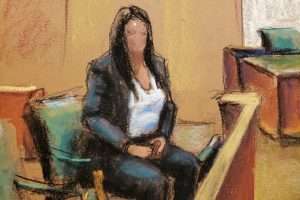 (NEW YORK POST) – A woman who says she was sexually assaulted by R. Kelly told a Brooklyn court that the singer locked her up without food or water for at least two days and then drugged her before the attack.

The accuser, who was interning at a Utah radio station during the 2003 incident, testified she was held captive in Kelly’s Chicago studio after the singer promised the then-21-year-old she could interview him.

The witness, identified as “Sonia,” said when she was finally allowed to eat she took a few bites and “felt something coming over” her. Her next memory was waking up to Kelly adjusting his pants while she felt “wet stuff” between her legs and on her thighs.

“Made me feel like something happened to me,” Sonia told Assistant US Attorney Maria Cruz Melendez at Kelly’s ongoing racketeering and sex abuse trial. “I know my body … I was touched sexually.”

Sonia, who discussed the alleged abuse in the 2019 Lifetime documentary “Surviving R. Kelly,” told defense lawyers she did not call police or doctors after the incident because she was scared of the singer and didn’t think anyone would believe her.

Sonia testified she signed two nondisclosure agreements at the studio without reading them, and was threatened not to cross Kelly before leaving. She never conducted the interview, the court heard.

A second witness named “Anna” told jurors Thursday that the singer would spank and punish her for violating his “rules” during a sexual relationship that ended in 2017. Anna said Kelly would record the sanctions on his iPad.

Anna, who is in her mid-20s, also said Kelly forced her to have sex with other women and a man known as “Nephew.”

An accuser named Jane testified last month that she was also forced to have sex with “Nephew” during her relationship with Kelly.

Robert Sylvester Kelly, 54, has pleaded not guilty to abusing and kidnapping women, girls and boys for decades with the help of his entourage. He is charged with nine counts of racketeering, and is accused of violating the Mann Act. If convicted, Kelly faces ten years in prison. The “Bump N’ Grind” singer faces similar charges in Illinois and Minnesota.

The court has heard from a litany of witnesses who have alleged Kelly knowingly transmitted herpes, performed oral sex on a teenage boy, and ordered a 16-year-old victim to lie about her age.

The court also heard from former associates of the singer that he groomed Aaliyah for sex when she was in her early teens, and bribed an official so he could illegally marry the then 15-year-old to avoid charges in connection with her supposed pregnancy.