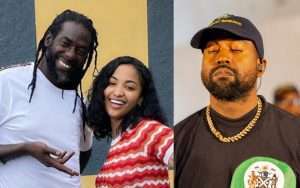 (URBAN ISLANDZ) – Shenseea and Buju Banton makes their Hot 100 debut this week thanks to their feature on Kanye West new album Donda.

Kanye West continues to shatter records with his new album “Donda” and the Jamaican stars, as well as others, who contributed to the project are also getting world-class exposure. The Shenseea feature “Pure Souls” and Buju Banton‘s feature “Believe What I Say” landed both artistes a spot on the Billboard Hot 100 chart this week making it their first appearance on the chart. Both Jamaican stars received writing credits for their respective parts on the album, Shenseea with her melodic background vocals and Buju with his vocals and prose rendition.

Shenseea was also featured on a second song of the 27-track album titled “Ok Ok Pt. 2,” where she had much more to say in a lengthier and fiery verse. This song did not make the Billboard Top 100 chart but has been making strides on other charts, as it was ranked at Number 56 on the Rolling Stone’s Top 100 songs this week.

Shenseea’s manager and perhaps her biggest cheerleader, Romeich Major, took to Instagram to congratulate his artiste, expressing his delight over the recent development.

He shared a screenshot of Billboard Chart’s Twitter post announcing that 23 of Kanye’s songs from the Donda album made the Hot 100 this week.

In his caption, he wrote, “So proud of my #shenyeng swear just 5 years and you are doing so much greatness for your music and culture.”

“@shenseea hits Billboard chart today. I keep feeling prouder and prouder each day keep working keep pushing and be the best you can that only will count,” he added.

Shenseea had expressed gratitude on numerous occasions to Kanye West for believing in her and having her on his album. Among other achievements, the project also debuted at Number 1 on the Billboard 200 album chart.

The exposure comes as Shenseea prepares for the release of her debut album that should drop sometime this year.

The songstress continues to make historical moves, as she is now the first female Jamaican artiste in 19 years to make the Billboard Hot 100 chart. She now joins the likes of Lady Saw (now Minister Marion Hall) and Patra.

Buju Banton, on the other hand, had a few Billboard successes in the past from his albums “Voice of Jamaica,” “Til Shiloh,” “Unchained Spirit,” and “Friend For Life,” which scored positions on other Billboard chart categories.

Both Shenseea and Buju Banton are currently getting ready to release new albums with the dancehall princess recently revealing that her debut album is done.