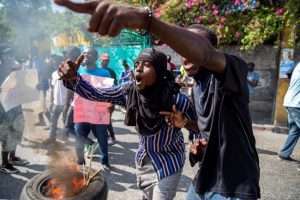 (AP) — Haiti’s government warned Monday about a spike in kidnappings and other crimes as it pledged to fight gangs, drawing retorts from two crime bosses that any crackdown will bring greater violence aimed at police in the already unstable country.

Ariel Henry, who was installed as prime minister weeks after President Jovenel Moïse was assassinated at his home in early July, said one of his priorities is to make Haiti safer.

“The current situation of insecurity in the country must be addressed, as it is of great concern,” he said at a news conference where the chief of Haiti’s National Police, Léon Charles, provided details of what authorities have done and plan to do.

Saying police have identified all gangs and the zones they control, Charles said officials launched an operation Friday against a gang called “Spitfire” whose leader was killed.

“All criminals who try to scare the population will suffer the same fate,” he said, noting the gang recently killed five police officers and attacked two police stations in the capital of Port-au-Prince.

“We cannot leave the door open to criminals who, for too long already, have been damaging society,” Charles said.

The announcement comes amid an increase in daily reports of gunfire and killings in Port-au-Prince just weeks after some gangs declared a truce and offered to help those affected by a magnitude-7.2 earthquake on August 14 that struck Haiti’s southwestern region, killing more than 2,240 people and destroying tens of thousands of homes.

Charles said police are investigating recent incidents including a drive-by shooting Sunday night that killed several people in the Delmas neighbourhood of Port-au-Prince.

Shortly after the news conference, one of Haiti’s most powerful gang leaders, former police officer Jimmy Cherizier, who goes by the name of “Barbecue,” criticised Charles’ pledge to crack down on gangs.

“The police live in poverty, and Léon Charles wants to send them to the butcher’s shop,” Cherizier said in a short video released to journalists. As he spoke, he cradled an assault rifle while sitting in front of 30 similar weapons hanging behind him.

Cherizier saluted the police officers that he said have joined his gang as he demanded better living conditions and improved schools and hospitals so Haiti’s next generations don’t have to turn to crime.

He addressed the police chief at the end of his video: “Arm yourself with courage and attack us!”

Another gang leader also released a video shared with journalists saying police have been harassing him ever since he killed a fellow gang member. The leader of the gang called “400 Mawozo,” which roughly translated means 400 lame men, said he isn’t looking to go to war with police but warned authorities he is ready to fight.

“Look at these mad dogs escorting me,” he said as the camera pans to more than a dozen men surrounding him holding assault rifles. “I’m not looking for a fight, but I have enough to fight with.”

He added that everyone kidnaps and that it would be a good thing if his gang did as well: “The population, the poorest, would benefit because we know how to share.”

Police have accused that gang and others of crimes including killings and kidnappings, with some human rights activists estimating that gangs control about 60 per cent of Haiti’s territory.

Gang violence has left some 19,000 people homeless in recent months, with thousands living in makeshift shelters and unsanitary conditions, according to a recent report from the United Nations. It also said that gangs controlling a key crossroad in the Martissant neighbourhood in Port-au-Prince have made it difficult to deliver aid to those outside the capital because it is too dangerous to drive through the area.

Last month, the aid group Doctors Without Borders said it was forced to permanently close its clinic in Martissant because of the spike in violence in that area. The clinic opened 15 years ago to serve a community of more than 300,000 people and it had tended to dozens of gunshot victims in recent weeks.