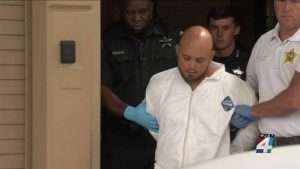 (AP) – Four people are dead including a mother still cradling her now-deceased baby in what a Florida sheriff called a massive gunfight early Sunday with a suspect “ready for battle” and so aggressive he tried to wrestle a gun from police from his hospital gurney after being captured.

Polk County Sheriff Grady Judd said the unidentified suspect was dressed in full body armour — including a bulletproof vest — when he was found outside a Lakeland home that had been “booby-trapped.”

He did not explain in detail except to say that glass lights were lining the driveway.

After a gunfight with police and deputies — where dozens “if not hundreds of rounds” were exchanged, Judd said, authorities entered the home and found an 11-year-old girl shot multiple times, plus three deceased victims, including a mother still holding her infant.

A woman at a neighbouring home was also killed.

Authorities have not released the names of the victims or shooter or a motive for the shooting, but the sheriff said they were initially called out for reports of a suspicious vehicle.

A woman encountered “a strange person” in a vehicle on the side of the road Saturday night who told her, “God sent me here to speak with one of your daughters,” Judd said during a news conference Sunday.

Police were on the scene within six minutes, but Grady said they found no trace of the suspect.

No other details about the woman’s relationship to the shooter or victims were released.