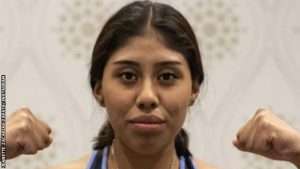 (BBC) – A teenage boxer has died, five days after being knocked out in a professional fight.

Mexican welterweight Jeanette Zacarias Zapata, 18, was knocked down in the fourth round against Marie Pier Houle at the GVM Gala International in Montreal on Saturday.

She appeared to have a seizure after being dazed by a left uppercut and a right hook and was taken to hospital.

The fight promoter, Yvon Michel, announced the news on Thursday.

“It is with great sadness and torment that we learned, from a representative of her family, that Jeanette Zacarias Zapata passed away this afternoon at 3:45 pm,” his statement read.

“The entire team at Groupe Yvon Michel team is extremely distressed by this painful announcement,” the promoters said in their statement, offering condolences to the fighter’s family.

Houle reacted on Instagram, saying how upset she was at the outcome.

“Boxing carries a lot of risks and dangers,” she said. “This is our job, our passion. Never, forever, intention to seriously hurt an opponent is part of my plans.”

The WBC also paid tribute to Zapata, saying: “The president of the WBC, Mauricio Sulaimán and the entire boxing family affiliated with the WBC, as well as all boxing, mourns this irreparable loss.

“We send our deepest condolences to the family and friends of Jeanette. May she rest in peace.”