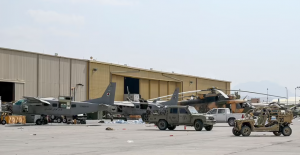 (DAILY MAIL) – The Taliban have seized an air force worth tens of millions of pounds, including US-bought helicopters and attack planes, giving them more aerial firepower than a third of Nato members.

Over the last few months, the jihadists have captured 10 major airfields from Bagram to Mazar-i-Sharif, and today took to the skies in a $6 million Black Hawk helicopter in their fight against the resistance in the Panjshir Valley.

Taliban chiefs are reported to have ordered their troops to hunt down pilots from the disbanded Afghan Air Force, who received expensive training from the US and its allies to fly high-tech warplanes and choppers.

The jewel in the crown, Hamid Karzai International Airport in Kabul, was seized on Tuesday by triumphant jihadists who were seen clambering into the cockpit of a $14 million Hercules transport jet.

The Afghan Air Force was operating 167 aircraft, including 108 helicopters and 59 planes, according to an official U.S. government inspection on June 30.

Before Kabul fell, Uzbekistan confirmed that 46 Afghan aircraft, including 24 helicopters, had arrived in the country in order to prevent them from falling into the hands of the Taliban.

The commander of the US evacuation mission, Gen. Frank McKenzie, said American troops disabled 73 aircraft before finally leaving the country on Monday night.

That leaves as many as 48 aircraft seized by the Taliban, although it is unclear what the breakdown is in terms of planes and helicopters.

It is unclear how many former pilots the Taliban have been able to recruit, however, a video which emerged on social media this month showed a group of militants flying in a Russian-made Mi-17 chopper.

Another today, showed a Black Hawk heading to the contested Panjshir Valley north of Kabul where the country’s last stand is being fought by the Northern Alliance resistance fighters.

It is unlikely that an amateur would be able to get such a helicopter off the ground, let alone be able to land it.

A single Black Hawk helicopter costs around $6 million, while a Hercules transport jet comes in at $14 million per unit.

Although many of the planes were flown away before the runways were seized, satellite imagery revealed that not all of them made it.

Analysis of satellite images commissioned by the BBC revealed that six days after Kandahar airport was captured by the Taliban, there were five aircraft – at least two MI-17s choppers, two Black Hawks and a third unidentified helicopter.

Around a month before the airbase was seized, there were 16 aircraft spotted – including nine Black Hawks, two MI-17s and five fixed-wing planes.

The aircraft were either flown to other runways in the country or shifted overseas.

An aerial picture of Uzbekistan’s Termez airport taken on August 16 shows that there were more than 24 helicopters, including MI-17, MI-25, Black Hawks and also several A-29 light-attack and C-208 planes.

The Uzbek government has since confirmed that 46 Afghan aircraft did land in the central Asian country.

They quickly realised that they would need pilots to fly the high tech vehicles and set about actively recruiting from members of the Afghan Air Force, who received top training by the US and its allies.

A total of 73 aircraft at at Hamid Karzai International Airport were ‘demilitarised’, or rendered useless.

Two weeks ago on August 14 when the US started airlifting troops and civilians from Kabul airport, Pentagon built up a force of nearly 6,000 troops, along with 600 British soldiers, to occupy and operate the airport.

Once the evacuation process ended, around 70 MRAP armoured tactical vehicles, which can cost up to $1m a piece, were disabled before leaving, along with 27 Humvees. ‘The vehicles will never be used again by anyone,’ he said.

The US also left behind the C-RAM system — counter rocket, artillery, and mortar — that was used to protect the airport from rocket attacks.

The system helped fend off a five-rocket barrage from the Islamic State on Monday.

‘We elected to keep those systems in operation up until the very last minute,’ before the last US aircraft left, McKenzie said.

‘It’s a complex procedure and time-intensive procedure to break down those systems. So we demilitarize those systems so that they’ll never be used again.’

Elsewhere in the passenger terminal of the airport, there appeared wanton destruction, with offices trashed and seating destroyed, but it was not clear whether that damage predated the arrival of the US and British troops.