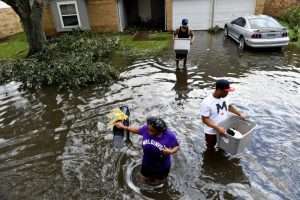 (AFP)— Louisiana and Mississippi took stock Tuesday of the disaster inflicted by powerful Hurricane Ida, as receding floodwaters began to reveal the full extent of the damage along the US Gulf Coast and the death toll rose to four.

New Orleans was still mostly without power nearly two days after Ida slammed into the Louisiana coast as a Category four storm, exactly 16 years after devastating Hurricane Katrina — which killed more than 1,800 people — made landfall.

Four deaths have been confirmed as crews began fanning out in boats and off-road vehicles to search communities cut off by the giant storm. A man was also missing after apparently being killed by an alligator.

Images of people being plucked from flooded cars and pictures of destroyed homes surfaced on social media, while the damage in New Orleans itself remained limited.

New Orleans Airport said all incoming and outgoing flights scheduled for Tuesday were cancelled, while airlines had scrapped nearly 200 flights on Wednesday.

One person was killed by a falling tree in Prairieville, while a second victim died trying to drive through floodwaters some 60 miles (95 kilometres) southeast in New Orleans, officials reported.

Ida knocked out power for more than a million properties across Louisiana, according to outage tracker PowerOutage.us, most of which still out Tuesday afternoon as late-summer temperatures rose.

The first to see power would likely be hospitals — many of which are dealing with a surge of COVID patients — and sewage and water treatment centres, the paper reported, saying it could still be days before average customers were reconnected.

Entergy had initially said it could take days to even assess the full extent of the damage.

In Mississippi, which has been buffeted by torrential rain, a road collapse left two people dead and 10 more injured, including three in critical condition, the state’s highway patrol said.

Meanwhile in St Tammany Parish, police said a 71-year-old man was attacked and “apparently killed by an alligator while walking in flood waters following Hurricane Ida.”

President Joe Biden declared a major disaster for Louisiana and Mississippi, which gives the states access to federal aid.

Louisiana Governor John Bel Edwards said his state had deployed more than 1,600 personnel for search and rescue operations, while the Pentagon said over 5,200 personnel from the military, federal emergency management and National Guard had been activated across several southern states.

As Ida — which has now been downgraded to a tropical depression — travels northeast, considerable heavy rain and flooding is expected to threaten the Tennessee and Ohio Valleys and move onward into the mid-Atlantic through Wednesday, according to the National Hurricane Center.

Scientists have warned of a rise in cyclone activity as the ocean surface warms due to climate change, posing an increasing threat to the world’s coastal communities.