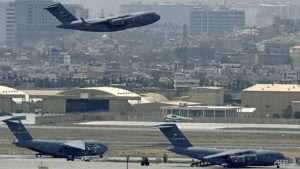 (AFP)— The US military announced it has completed its withdrawal from Afghanistan after a brutal 20-year war — one that started and ended with the hardline Islamist Taliban in power, despite billions of dollars spent trying to rebuild the conflict-wracked country.

Celebratory gunfire rang out in Kabul in the early hours of Tuesday to mark the moment, which came after the fraught final days of a frantic mission to evacuate tens of thousands of Americans and Afghans who had helped the US-led war effort — and which left scores of Afghans and 13 US service members dead in a suicide bombing last week.

That attack — claimed by the Islamic State’s Afghan offshoot — gave edgy urgency to the final days of the US-led effort to allow those seeking to flee Taliban rule out of the country.

The withdrawal came before the end of August 31, the actual deadline set by President Joe Biden to call time on America’s longest war.

“I’m here to announce the completion of our withdrawal to Afghanistan and the end of the military mission to evacuate American citizens,” US General Kenneth McKenzie told reporters Monday.

The final flight left at 1929 GMT Monday – just before the start of Tuesday in Kabul, he said.

The return to power a fortnight ago of the Taliban movement, which was toppled in 2001 when the United States invaded in retaliation for the September 11 attacks, triggered a massive exodus of people who fear a new version of hardline Islamist rule.

The evacuation flights have taken more than 123,000 people out of Kabul airport, according to McKenzie.

The regional Islamic State-Khorasan (IS-K) group, rivals of the Taliban, posed the biggest threat to the withdrawal, after carrying out a suicide bombing outside the airport last week that claimed more than 100 lives, including those of 13 US troops.

On Monday, they claimed to have fired six rockets at the airport. A Taliban official said the attack was intercepted by the airport’s missile defence systems.

Before the US withdrawal was confirmed, the UN Security Council adopted a resolution requiring the Taliban to honour their commitment to let people freely leave Afghanistan in the days ahead, and to grant access to the UN and other aid agencies, but did not create a “safe zone” in Kabul.