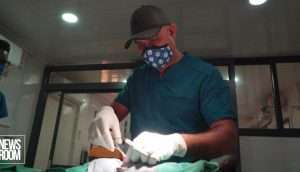 (GUYANA NEWS ROOM) – Determined Veterinarian Dr Nardeo Bassudeo and his team from NB Veterinary Services worked tirelessly on August 8 for 11 hours to achieve a record for Guyana by completing 107 spay and neuter surgeries done by a single vet in one day.

Dr Bassudeo teamed up with Paws For Cause, a local animal rights organisation, and together, the feat was pulled off with no breaks in between.

Beating the record was always a goal for Dr Bassudeo, who has been in the profession for over 10 years.

“We’ve always heard about veterinarians operating on a lot of animals and when we asked, how many animals were done, we heard about 50, 48 and those numbers were low,” Dr Bassudeo told the News Room during an interview at his Prashad Nagar office.

At one time, Dr Bassudeo said the team came close, with 98 surgeries in one day but never went past the 100-mark until now. With this spay and neuter campaign, the team operated on both cats and dogs – a total of 82 females and 22 males.

But what really is spaying and neutering?

Preparation for the spay and neuter campaign, according to the vet, involved hours of training and coordination with both teams to ensure that the process, which started at 06:45 hrs, went off without a hitch.

“Our team at NB Veterinary Services, which consists of the technician and the volunteers, trained the sponsors of the campaign to ensure that everybody was working in sync as it relates to what time the animals needed to come, what type of animal (and) how many we needed at a time.

“They had the hardest part of it, coordinating with everyone to ensure that the animals came on time, getting the sex of the animal and its physical state and Paws For Cause did an excellent job at it,” he explained.

Much of that coordination is owed to the volunteers, said Rabin Chandarpaul, Director at Paws For Cause. He explained that the organisation merely facilitated the payment, transportation and post-op checkups.

Paws For Cause focuses heavily on the societal benefits of spaying and neutering pets as it helps to address an issue affecting Guyana for years: stray animals.

“In a perfect world, we can imagine every dog lover, every cat lover having one male, one female they mate – they have a beautiful litter of puppies or kittens and then you find homes for them but that is not what happens.

“And it explains in a very big way why Guyana has an issue with strays, all sorts of animals,” Chandarpal explained further.

Guyana has always had an issue with strays roaming the roadways and sometimes, resulting in horrific accidents that either claim the lives of drivers, the animals or both. In fact, the government was forced to introduce a Stray Catch Programme in 2011. But this has done little to address the issue.

This is where spaying and neutering come in and form part of the bigger reason why Dr Bassudeo and his team embarked on the campaign.

“Spaying and neutering is very important when it comes to society. I mean, sometimes you are on the road, you’re seeing animals being killed and then trucks sometimes run over these animals,” Dr Bassudeo said.

He added, “It is traumatizing; so we have to ask ourselves whether is this the way we want our children to grow up.”

Now, with the record of 107 surgeries made, Dr Bassudeo said his team will continue to roll out their spay and neuter campaign but will try to reach a higher number one day.