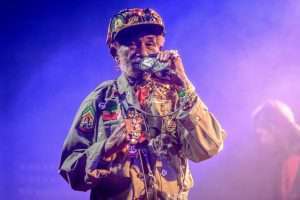 The legendary artist and producer died at the Noel Holmes Hospital in Lucea, Hanover, on Sunday morning. Known for his eccentric styles and provocative song lyrics like “Pum Pum,” the artist had been briefly sick, according to reports. Perry, who previously lived in Switzerland with his wife Mireille, leaves behind their two children and his four other children from previous unions.

Lee “Scratch” Perry, whose real name is Rainford Hugh Perry, was recognized globally as a pioneer for the Reggae genre with fans across the world. He was born in the community of Kendal, Hanover, and rose to fame in the late 1960s as Reggae music took off in Jamaica. Over the decades, he quickly became known as a producer of cutting-edge music.

His long and distinguished career has seen him working with some of the greatest artists like Bob Marley and the Wailers, Junior Murvin, the Congos, the Beastie Boys, and others.

Perry is also recognized as the pioneer behind the lesser popular Dub genre and had his own studios that produced music in which he was also a recording artist under the name “The Chicken Scratch,” which he later just used “Scratch” on stage.

At the start of his career, he worked with the “The Upsetters” band, which supported Bob Marley full time from 1968-1972, resulting in a number of successful projects that Marley released such as ‘Soul Rebels’ and ‘Soul Revolution’.

Perry eventually started his own studio, beginning with the Black Ark that he built in his backyard as he produced some of the biggest hits for Bob Marley and the Wailers, Junior Byles, Junior Murvin, The Heptones, The Congos, and Max Romeo.

From there, Lee “Scratch” Perry is historically credited for incorporating drum machines and special effects in music that led to the birth of the dub era and later the development of reggae music as we know it today, as well as hip hop and rock music.

The studio was later burned down, however. According to reports, by 1978, the artist was under severe stress and became exhausted, leading to the Black Ark falling into disrepair. Perry, in later interviews, said that the fire that destroyed the studio was no accident, arguing that he had burned the Black Ark in a sudden fit of rage.

After the destruction of the Black Ark, Perry continued his music life, but by the early 80s, he left Jamaica and spent the majority of his time in England and the United States, where he performed extensively and started making more music that allowed him to be eccentric and outlandish.

According to his biographical profile, his career took a different turn in 1984 after meeting Mark Downie, with whom he worked on the 1986 album Battle of Armagideon for Trojan.

Music experts have often lauded Perry’s eccentricity and creativity on his ability to stay relevant. According to Perry, his creativity developed after he stopped drinking alcohol and smoking marijuana.

Perry’s marijuana habits were particularly amusing, and those who observed him in the studio knew he operated almost “ritualistic” in which he recalls that before his recording sessions, “he blew smoke into the microphone so that the weed would get into the song.”

In later interviews, he explained that that ritual was for him to see if “it was the smoke making the music or Lee Perry making the music. I found out it was me and that I don’t need to smoke,” he said leading to him quitting smoking.

Lee “Scratch” Perry became famous as the singer of “Dr. Lee, Ph.D.” on the Beastie Boys’ ‘Hello Nasty’ in 1998, and among his notable achievements are his 2003 Grammy award for Best Reggae Album for Jamaican E.T and being named by Rolling Stone as among the 100 Greatest Artists of All Time, placing at 100.

He has also received several Grammy nominations in the Reggae Album category over the decades.

Meanwhile, Perry was recognized by the Jamaican government for his contributions to national development and received the Order of Distinction, Commander Class award in 2012.

Condolences have been pouring in from thousands of Jamaicans for Perry. Among them is the Prime Minister of Jamaica, Andrew Holness, who paid tribute to the legendary artist and producer.

“Undoubtedly, Lee “Scratch” Perry will always be remembered for his sterling contribution to the music fraternity. May his soul Rest In Peace,” the PM wrote on his official Twitter account.

Jamaica’s Entertainment, Youth, and Culture Minister Olivia’ Babsy’ Grange also confirmed the artist’s death and sent her condolences to his family as she noted the artist’s distinguished life.

“My condolences to his widow, Mireille, his children and other relatives. What a man, what a music, what a life, what a genius!” she tweeted.

“His immense body of work, as a producer & artist, underscores his influence. His unique touch & feel enriched some of our most beloved popular musical compositions. RIP Lee Perry.”