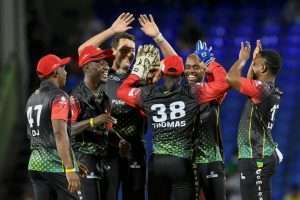 (CPL T20) – St Kitts & Nevis Patriots got their 2021 Hero Caribbean Premier League (CPL) campaign off to a winning start with a comprehensive 21 run win over the Barbados Royals.

Barbados Royals won the toss and put the Patriots in to bat but despite a flurry of early wickets, a fantastic 115 run partnership between DJ Bravo and Sherfane Rutherford ensured the Patriots set the highest total of the tournament so far with 175/5.

In reply the Patriots were never under threat as they produced an excellent bowling display to keep the shackles on the Royals throughout.

The Royals took full advantage of their decision to field first by removing both openers, Evin Lewis and Devon Thomas, in the first three overs before Oshane Thomas bowled Chris Gayle to leave the Patriots teetering at 38/3 at the end of the PowerPlay.

Bowling with real zip, Oshane Thomas was to strike once more removing Asif Ali in the eighth over as his hostile spell resulted in exemplary figures of 3/22 from his four overs.

Patriots captain Bravo entered at the fall of the fourth wicket and along with Rutherford they consolidated the innings before exploding into life in the final seven overs.

Much like the Royals, the Patriots made early inroads with their bowling dismissing both openers inside the first three overs. Although they needed a calamitous run-out to get them on their way when Johnson Charles found himself at the same end as Glenn Phillips.

Through the middle phase overs the Patriots put a stranglehold on the game forcing the run-rate up and putting pressure on the Royals batsmen to play high-risk shots.

Jason Holder and Kyle Mayers fell without making a significant indent on the scorecard and although Shai Hope anchored the innings with a well-constructed 44 his dismissal with six overs to go left too much to do for the remaining batsmen.

Azam Khan showed a few signs of his potential with some late blows, but the Patriots closed out the Royals innings with minimum fuss.