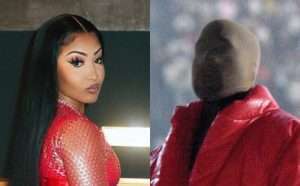 Dancehall Artiste Shenseea is scoring another major victory as the 24-year-old artist is poised to make her debut on Kanye’s much-anticipated album Donda That’s according to her Jamaican music manager Romeich Major who shared photos of the artist at the Kanye event.

Shenseea sang the chorus to the song while Kanye was rapping.

Some fans are speculating that Shenseea’s appearance called Kanye’s move “petty” as a jab at Drake, who Kanye West is supposedly beefing with because of a nasty rumor involving Drake and Shenseea.

Earlier in the year, a screenshot purportedly said to be between Drake and Shenseea alleged that the dancehall deejay was pregnant for Drake, and Drizzy wanted an abortion as he accused Shenseea of wanting to have his child to capitalize on a career like the Kardashians.

Shenseea later addressed the rumor and said that she was disgusted that someone would go to such lengths to make up false rumors.

Romeich, however, shared that the artist is about to take a step up in the world of music.

“Truth is only thing you get away with,” Major wrote on Instagram to a series of videos in which Shenseea can be heard singing the same line. “Happy weekend my IG family. Yard Gyal voice out there in the world…big big look #shenyengboss you work hard so let the world see and listen you work,” he added.

He also posted a photo of Shenseea wearing an all-black outfit and half-moon shades with a short bob hairstyle.

Elsewhere, Major posted on his Instagram Stories that Shenseea has been busy recording music over the last week.

“On set again just let me tell you @shenseea is not human this girl been to 5 [states] and 2 days of shoot 4 different studio 7 songs all in 6 days,” he said.

Meanwhile, teammate Donny ‘Dizzy’ Clean Flores shared videos on Instagram Storie of Shenseea getting ready while in traffic on the way to the Kanye event. The artist is seen sporting cornrows and doing her eyebrows, and makeup as Dizzy notes the traffic was crazy that Shenseea had to get ready while on the way to the event.

Shenseea later shared a video of herself with the slick bob style weave and her makeup immaculately done as she says “no excuses,” for not getting to her event on time.

Shenseea has been working hard to launch her music career in the United States as she tries to break into the rap and hip-hop music scenes. The deejay has constantly shared her versatility as she introduces new fans to her rap freestyle.

In a recent interview, Shenseea shared that her dream is to become big globally, and she intends to follow the path of Rihanna, who inspires her and launch her own shoe brand as well as makeup.

In the meantime, the artist has stated that her debut studio album is on the way. Shenseea is signed to Interscope Records.

Her appearance on Kanye West’s upcoming album, Donda, is one step closer achieving her goals.