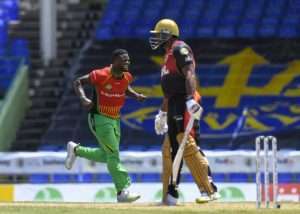 Sent in at Warner Park, Guyana Amazon Warriors were lifted to 142 for seven off their 20 overs courtesy of Hetmyer’s top-score of 54 off 41 balls, which included four fours and a couple of sixes.

In reply, TKR were held to 133 for nine from their 20 overs after fast bowler Shepherd snatched three for 15 from his four overs.

Denesh Ramdin top-scored with 28, and New Zealander Tim Seifert chipped in with 23, but rebounding from 86 for six when captain and talisman Kieron Pollard perished at the end of the 14th over proved a mountain too high to climb for TKR.

“I just thought at the back end we gave them a couple too many runs, dropping a couple catches, and we weren’t as sharp as we normally are,” said a disappointed Pollard.

“And when we batted, I think we lost wickets too quickly, in clusters. I think we only have ourselves to blame for not coming over the line in this one.”

The defeat was the first since 2019 for TKR, who produced a record unbeaten campaign last season in winning the title in Trinidad and Tobago.

Nicholas Pooran, in charge of Amazon Warriors for the first time this year, said they had approached the game positively despite being up against a difficult TKR side.

“We talked about starting the tournament good. TKR are a very good team, but the thoughts were all positive,” Pooran said.

“It was tough at the end, but we stuck at it. We fought, we fought, and we fought to the end. Hetty (Hetmyer) played very good, and Odean Smith played well, and we’re very thankful for this victory today.”

Hetmyer’s knock was pivotal, especially after openers Chandrapaul Hemraj (13) and Brandon King (9) both failed, and Smith belted a 15-ball 24 with fours and six before missing a swing at off-spinner Sunil Narine (2-17) in the eighth over and having his stumps shattered.

Hetmyer tempered his stroke-play to add 22 for the fourth wicket with Shoaib Malik (2) before adding 38 for the seventh wicket with Shepherd (9 not out) after Pooran perished cheaply for 12 in the 18th over.

TKR’s run chase was then unusually disjointed and lacking in partnerships, and with wickets tumbling regularly, Amazon Warriors always appeared in control.

Shepherd made all the key strikes, removing dangerous opener Lendl Simmons for five in the second over with 14 runs on the board, holing out to mid off before returning to account for Pollard (2) cheaply, gloving a lifter behind in the 14th over.

Ramdin, who hit two fours and a six off 25 balls, became Shepherd’s third victim with the game already gone, picking out Shoaib at long on in the penultimate over.

B King c Udana b Hosein 9

R Shepherd not out 9

J Seales not out 0