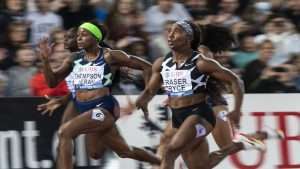 (FRANCE 24) – Shelly-Ann Fraser-Pryce avenged her Olympic Games defeat to Jamaican compatriot Elaine Thompson-Herah by winning the 100m at the Lausanne Diamond League meeting on Thursday in the third fastest ever time.

The 34-year-old Olympic champion from 2008 and 2012 clocked 10.60sec, just five days after Thompson-Herah had run the second fastest of 10.54sec at Eugene in the United States.

Thompson-Herah, the triple gold medallist from Tokyo thanks to wins in the 100m, 200m and 4x100m relay, was second Thursday in 10.64sec, the eighth-best time in the event’s history.

Both women are agonisingly close to breaking the world record of 10.49sec set by Florence Griffith-Joyner of the United States in 1988.

Fraser-Pryce and Thompson-Herah will get their next chance to shatter the 33-year-old record at the next Diamond League meet in Paris on Saturday.