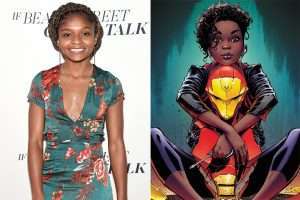 (TRINIDAD NEWSDAY) – Dominique Thorne, who was born to Trini parents in the US, will be making her Marvel debut in 2022 in Black Panther 2: Wakanda Forever.

The 23-year-old actress was born and raised in New York but her mother, Nerissa Guy, is from Carapichaima and her father, Navie Guy, is from Mayaro.

Last December, Marvel confirmed that Thorne would star as Riri Williams in an upcoming Disney Plus series, Ironheart.

The Marvel character made her first cameo appearance in 2015 in the comic book Invincible Iron Man. But only as Williams. Her debut as Ironheart was in 2016.

Marvel describes the character as “the creator of the most advanced suit of armour since Iron Man.”

She is a 15-year-old genius from Chicago who attends the Massachusetts Institute of Technology (MIT) and has a love of high-tech armour.

Newsday featured Thorne last December where she spoke about her excitement for the series, her love for doubles and crab and dumplings, among other things.

In an exclusive interview with Comicbook.com on August 19, Marvel Studios president Kevin Feige announced Thorne would make her debut in the upcoming Black Panther film.

Tobagonian actor Winston Duke is also set to star in the movie, having made his Marvel debut in the first Black Panther film. He plays M’Baku, leader of the Jabari tribe in Wakanda.

“She (Thorne) started shooting, I think, this week before her Ironheart series.”