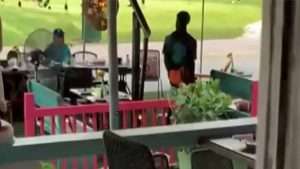 (NEW YORK POST) – A Georgia man “randomly” shot and killed a tourist in a Miami Beach restaurant and danced over his body as the man tried to protect his 1-year-old baby from the gunman, reports said.

Tamarius Blair Davis, 22, of Norcross, Georgia, was allegedly high on psychedelic mushrooms when he opened fire on 21-year-old Dustin Wakefield at close range before he danced over his body in view of horrified onlookers dining outdoors at La Cerveceria de Barrio on Miami Beach’s famous Ocean Drive on Tuesday night, witnesses and police said.

“After the shooting, he was dancing on top of the guy,” a witness, who didn’t want to be identified, told CBS Miami.

Wakefield, who was on vacation from Castlerock, Colorado, attempted to protect his 1-year-old son before he was shot multiple times, his family told the Miami Herald.

“This guy came in with a gun waving it, saying ‘It’s time to die.’ He pointed the gun at his son and Dustin said, ‘He’s only a boy,’” his uncle, Mike Wakefield, told the newspaper.

“Dustin stood up between the gunman and the baby and he shot him. He shot him multiple times on the ground.”

Video obtained by WSVN shows the alleged shooter dancing as screams are heard from inside the restaurant. A witness told the station he had been told the deranged gunman appeared to be smiling and laughing throughout the disturbing attack.

He later told police he took mushrooms “which made him feel empowered,” FOX 13 said, citing his arrest report.

Authorities have not released the identity of the second victim.

Police responded to 911 calls about the shooter and found David trying to open a locked door while holding a firearm, CBS Miami reported.

Footage showed David in an alleyway next to the scene, yelling, “I did it. I did it,” the Miami Herald reported.

Officers ordered him to drop the weapon and he complied, then was taken into custody.

Davis’ father told The Associated Press that his son didn’t have a troubled history with crime or mental health issues.

“You think you know your kid but you don’t,” Tommy Davis told the AP. “It is possible someone gave him something. That is something we need to find out.”

Davis faces charges of second-degree murder with a weapon and attempted murder and was being held without bond Wednesday at the Miami-Dade County Jail.