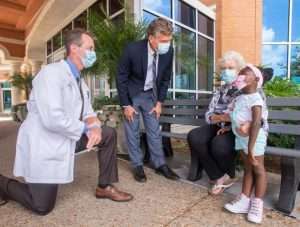 (PNJ) – Ever since she learned to talk, 3-year-old Sadie Williams has been a little shy about her left arm. It moved differently and didn’t look like other people’s arms.

Sadie, who was born and lives in the Caribbean country of Grenada, has a medical condition called brachial plexus birth palsy. It caused her left arm to appear slightly bowed and limited her ability to extend it up and out in front of her chest, making it difficult to do things like lift her hand to her mouth to eat.

But Sadie’s life was forever changed Friday after she successfully underwent a major surgery to correct her arm at the Andrews Institute in Gulf Breeze.

The operation, even if it was readily available in Sadie’s home country, would normally have cost her family thousands of dollars. Two Gulf Breeze surgeons, Dr. Steven Kronlage and Dr. Chris O’Grady, donated the surgery pro bono.

“That’s the blessing,” Kronlage said. “You can do procedures on kids like this and it can actually change their entire life. We’re so lucky to be able to do that because, really, what better service is there out there.”

Sadie’s father, Michael Nelson, said he was extraordinarily thankful to the Andrews Institute and the surgeons for performing the life-altering surgery. A day before the surgery took place, he said both he and his daughter were excited for the operation.

None of it would not have been possible without his longtime friend, Brenda Boulton.

Nelson and Boulton met 20 years ago in Grenada, where they were brought together by a mutual interest in sailboats.

Boulton, 81, of Gulf Breeze, loves to sail. The older she’s gotten, the less of it she’s been able to do, but there was once was a time when Boulton sailed from Gulf Breeze down to Grenada at least once a year.

On one of her trips, Boulton hired Nelson to help fix her boat, and they became fast friends, staying in touch through the years. Nelson and his family would even visit Gulf Breeze occasionally to see Boulton.

In the past several years, those trips have slowed down, so it wasn’t until recently that Boulton learned her good friend’s daughter had brachial plexus birth palsy.

“When I learned about it through Mike and his sister, I knew I had to try to do something to help,” Boulton said.

She started calling hospitals around Florida, asking if they would be willing to perform a complicated surgery pro bono for a child. She struck out at first, but then thought to contact the Andrews Institute, where she has often received consultation about her own ailments.

Within a day of emailing her physician’s office, Boulton received a reply that Kronlage and O’Grady were willing to operate on Sadie’s arm for free.

“This is a miracle,” Boulton said. “These guys are committing a miracle. It makes me want to cry. I’m so happy.”

Sadie’s shoulder did not develop properly, so her shoulder essentially worked like a hinge, rather than a pivot, Kronage explained. The surgery corrected that by cutting and rotating the humerus bone about 70 degrees.

“The operation will allow Sadie to move her arm in a more standard range of motion, allowing her to lift her arm out and upward to her mouth without it bending at or tilting at an abnormal angle,” he said.

The surgery Friday was a success, and Sadie and her father will stay at Boulton’s house in Gulf Breeze until at least early September as Sadie recovers.