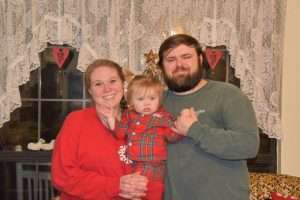 (NEW YORK POST) – A 32-year-old pregnant Alabama nurse and her unborn child died of COVID-19 after the woman refused to get vaccinated against the virus, according to a report.

Haley Mulkey Richardson worked in the labor and delivery unit at a Pensacola hospital, and contracted COVID-19 about three weeks before her death Friday, according to Al.com.

Richardson, who lived outside of Mobile, was transferred to an ICU after her symptoms deteriorated, according to the report.

“After about three or four days in the hospital, the [obstetrician] told her that she was going to lose the baby,” family friend Jason Whatley reportedly said. “And she continued to get worse and worse.”

“At some point, they basically told her that we’ve got to start treating you as if you didn’t have a child. We’ve got to do what we can for you because the baby is going to pass anyway.”

Julie Mulkey, Richardson’s mother, said her daughter refused to get vaccinated even though the hospital where she worked mandated it, the outlet stated. Richardson was reportedly concerned it would cause anaphylactic reactions.

“Haley had had anaphylaxis reactions in the past,” Mulkey said. “So for that reason, she felt that it was not safe for her.

“And then, of course, with all the negative reporting that has gone on, what was she to believe about what the vaccine would do to reproduction?”

The CDC has urged all pregnant women to get vaccinated, including expectant mothers who don’t have a higher risk of severe illness and pregnancy complications such as miscarriage and stillbirths.

A local doctor told the outlet that reports linking COVID-19 vaccines to infertility are baseless.

Alabama has the lowest vaccination rate in the US, with less than 37 percent of the population fully inoculated against COVID-19, as it grapples with an average of more than 4,000 new cases a day, according to Johns Hopkins University.

‘I can’t watch them die like that’: Alabama doc refuses to treat unvaccinated patients
Mulkey and her other daughter are now asking other pregnant women in Alabama to get a jab, as the state’s ICUs continue to be overwhelmed, according to the report.

“Since her illness, we have found that this is hitting many, many pregnant women that are 26-27 weeks into their pregnancies,” she said. “And the baby died two days before she would have been 27 weeks. So I understand there’s quite a few women in UAB in the same shape.”

Richardson, who left behind a daughter and her husband Jordan, made a final heavy-hearted Facebook post on August 9, before she was reportedly put on a ventilator.

“Here in the dark, in the wee hours of the morning, it is so easy to pretend that all of this was just a nightmare or that I’m just here in this hospital bed due to my own issues with Covid,” Richardson wrote. “Not for anything being wrong with my sweet baby girl whom I thought I was protecting in my own womb.”