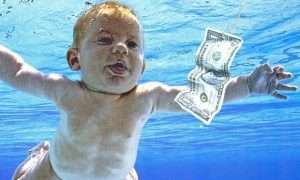 (THE GUARDIAN) – Spencer Elden, who appeared as a naked baby on one of rock music’s most iconic album covers – Nevermind by Nirvana – is suing the band, claiming he was sexually exploited as a child.

In a lawsuit filed in a Californian district court against numerous parties, including the surviving members of the band, Kurt Cobain’s widow Courtney Love, and the record labels that released or distributed the album in the last three decades, Elden alleges the defendants produced child pornography with the image, which features him swimming naked towards a dollar bill with his genitalia visible.

The lawsuit accuses the defendants of “commercial child sexual exploitation of him from while he was a minor to the present day … defendants knowingly produced, possessed and advertised commercial child pornography depicting Spencer”.

Elden, who was four months old when the image was made, says he has suffered “lifelong damages” from the 1991 album cover, including “extreme and permanent emotional distress with physical manifestations”, plus loss of education, wages, and “enjoyment of life”.

The lawsuit claims the image is “sexually graphic”, and says it makes Elden resemble “a sex worker – grabbing for a dollar bill”. It claims Elden was never paid for appearing on the cover, and that his parents never signed a release form for the image, which was shot specifically for the album cover. It has previously been reported that Elden was paid $250.

Elden is seeking damages of at least $150,000 from each of the 15 defendants, plus costs, and asks that the case be tried with a jury. The defendants have not yet responded to the lawsuit, or commented on it publicly. The Guardian has contacted Elden, his lawyer, and the managers of the Nirvana estate for further comment.

In 2016, Elden recreated the image with the New York Post newspaper to mark the album’s 25th anniversary, saying: “It’s cool but weird to be part of something so important that I don’t even remember.” That year he also said: “Recently I’ve been thinking, ‘What if I wasn’t OK with my freaking penis being shown to everybody?’ I didn’t really have a choice.” He had previously recreated the image for Rolling Stone, aged 10.

Robert Fisher, who designed the cover, said the image was inspired by Kurt Cobain seeing a documentary about babies being born underwater. “[He] thought the image would make a cool cover. That vision was a bit too graphic, so we went with the swimming baby instead.” It is seen by many fans as a comic image, that satirically suggests the band, who had signed to a major label for the album, are grasping for money.

Kirk Weddle, who shot the image, told the Guardian in 2019: “I’m still in contact with Spencer. I used to think, ‘Man, when that kid is 16 he’s gonna hate my guts!’ He doesn’t, but he’s conflicted about the picture. He feels that everybody made money off it and he didn’t. I think he deserves something. But it’s always the record labels that make the money.”