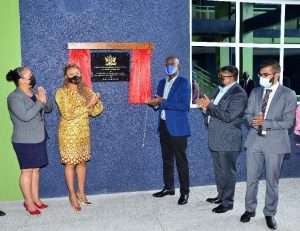 (TRINIDAD EXPRESS) – Take the vaccine or else.

Prime Minister Dr Keith Rowley has warned that if by mid-September herd immunity is not achieved in vaccinating the 12-to-18 school population, then the Government would do what it must and act, as has been done for other diseases such as mumps and measles.

Speaking at the commissioning of the San Juan Government Primary School yesterday, Rowley pleaded with parents and guardians to get their children vaccinated, pointing out that in other countries children are being hospitalised in the Intensive Care Unit (ICU).

He said Trinidad and Tobago has the Pfizer vaccine, the only one approved to inoculate children.

“We have vaccines so, therefore, we are able to vaccinate a significant proportion of our children and bring them out to school and have a good scientific basis to say that if these vaccinated children are out to school for face-to-face learning their exposure to the damage and danger which the virus promise is not great and it’s on that basis I am asking parents to do your children the favour of getting them vaccinated to be protected not only at home but in school and allow them to come back to school,” he said.

“Because if at the end of the period we have set, which is mid-September, we look back on it and we see only a population of vaccinated pupils which is well below the herd immunity level of 60 or 70 per cent then the Government will have to act,” he added.

The Prime Minister evaded the media when attempts were made following the function to question him further on his comments.

Rowley said it is currently in the hands of parents to be reasonable and responsible.

“If it gets to that, the Government will have no difficulty in intervening on the children’s behalf as we’ve done in measles, in mumps, in other aspects of healthcare where the children can’t make the decision for themselves. We will not do this lightly but if we have to do that, we’ll do it. So those who have a million and one reason from Facebook to not get the children vaccinated that is your right, but by the same token other parents have rights for their children and the Government has a right and a responsibility,” said Rowley.

The Prime Minister said some people believe this is a joke and maybe they have not seen the pain of the 1,000-odd families (1,237 up to yesterday) who have lost loved ones to Covid.

Rowley said the elderly are not the only ones at risk as he warned that the Delta variant is having a deleterious effect on children.

He said yesterday he listened to a colleague in Antigua saying that children as young as a few months old up to 12 years old were infected with the virus.

“I don’t think that any parent in this country would want to be responsible for a child that is lying in the ICU and could have been protected and given a chance to evade that experience, a life-changing and possibly life-taking experience because you know more than (CMO) Dr (Roshan) Parasram and you know more than the WHO,” he said.

Rowley said the Government moved “heaven and earth” to encourage the Americans to share their Pfizer vaccines with T&T and it took a lot of work to ensure this success.

He said the target is to have pupils in school next month.

“We are just a couple weeks away from September, we have not advertised an opening date for school face to face at this time but we are doing everything possible to put us in a position to have children, at least that cohort of the Form Four, Form Five and Form Six pupils to come back to school,” he said.

He said, hopefully in time and with the management of the infection rate, other pupils can be brought in.

Rowley said T&T is probably in the “best position” in a pandemic given the large access to vaccines. However, he warned again about the Delta variant which is on the horizon and could land the country in grave trouble.

The Prime Minister said he has heard all kinds of excuses people have against vaccination.

He noted that Guadeloupe, which falls under the purview of France and which had access to vaccines, is now asking Paris for refrigerated containers to put bodies because the hospital system there is overrun.

The Prime Minister said another excuse he heard is that the vaccines here only have emergency WHO authorisation and they have not been approved by the US Food and Drug Administration (FDA).

He said the reason why WHO approved them for emergency use is because there’s an emergency and this was done on the basis of the scientific ongoing data.

Rowley noted that the Pfizer vaccine has now gotten FDA approval and asked whether the critics will now look for another excuse. See Page 21

“Or that it is our right to rely on the cross around your neck,” he said.

Rowley said we all believe in God and are God’s children but God requires that people use common sense.

He said further that he heard a detractor say that people should not use the Johnson and Johnson (J&J) vaccine because it came from South Africa because they did not want it.

“I am appealing to you to stop taking your information from people of that ilk,” he said.

He said these J&J vaccines were not a gift but good money was paid for them.

Rowley said the use of these vaccines in the rural and remote areas is not because the J&J vaccines are “second class” but because it is one-dose vaccine and it makes sense to utilise this in the far areas such as Grande Riviere.

The Prime Minister also said that he used Ivermectin to treat his sheep at the weekend in Tobago, adding it is a drug to treat internal parasites in animals such as sheep, goats and horses.

He said all of a sudden people are saying to use Ivermectin as he noted even a doctor tried advising him about this.