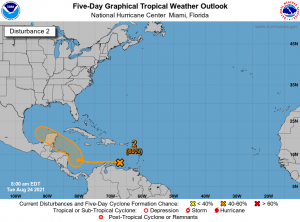 (FLORIDA TODAY) – The National Hurricane Center is monitoring three tropical waves in the Atlantic basin, two of which could become tropical depressions by the end of the week.

Two of the tropical waves are in the Atlantic, but a third in the Caribbean may affect areas still recovering from Hurricane Grace.

If the system tracks farther to the north, it could bring heavy rainfall or even some wind to South Texas, according to AccuWeather forecasters.

The next named storms of the season will be Ida, Julian and Kate.

What’s out there and where are they?

Tropical wave 1: A broad trough of low pressure is producing disorganized showers and thunderstorms over the central tropical Atlantic about 900 miles east-northeast of the northern Leeward Islands.

Tropical wave 3: Another tropical wave over the far eastern tropical Atlantic located about 400 miles south-southwest of the Cabo Verde Islands is producing a concentrated area of showers and thunderstorms.

How likely are they to strengthen?

Tropical wave 1: Little development of this system is expected during the next day or two due while it moves northwest at about 15 mph over marginally conducive ocean temperatures and is affected by strong upper-level winds. Afterward, environmental conditions are expected to become more favorable for gradual development, and a tropical depression could form by the end of the week while the system turns east over the central Atlantic.

Tropical wave 2: Environmental conditions are forecast to be conducive for development of the low, and a tropical depression could form late this week or this weekend while the system moves northwest over the northwestern Caribbean Sea, across the Yucatan Peninsula of Mexico, and into the southwestern Gulf of Mexico by Sunday.

Tropical wave 3: Some development of this system is possible over the next several days while it moves west to west-northwest at 10 to 15 mph over the eastern tropical Atlantic. Upper-level winds are forecast to become less conducive for development by the weekend.

Who is likely to be impacted?
Tropical wave 1: It’s too early at this time to know whether this system could impact the U.S.

Tropical wave 2: Even if it does not strengthen, the tropical wave can enhance showers and thunderstorms from late Wednesday into Thursday across Jamaica and the Cayman Islands, two areas that were also pummeled by Grace’s heavy rain last week.

The system may develop into a tropical depression or tropical storm prior to reaching Mexico’s Yucatán Peninsula or across the southern Gulf of Mexico, according to AccuWeather.

It also is not out of the question that it could track farther to the north and bring heavy rainfall or even some wind to South Texas.

Tropical wave 3: It’s too early at this time to know whether this system could impact the U.S.

Forecasters urge all residents to continue monitoring the tropics and to always be prepared during what’s expected to be an active hurricane season.