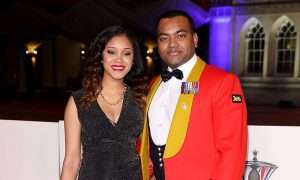 (THE MIRROR) – Victoria Cross hero Johnson Beharry is having a blockbuster movie made of his life – with some of Hollywoods biggest stars being lined up to play him.

BlacKkKlansman star John David Washington, Luther’s Idris Elba and Star Wars actor John Boyega are all names discussed with Johnson by directors of one of the world’s biggest film companies who are taking his incredible story of heroism to the big screen.

The movie will follow in the footsteps of real life war epics including 2016’s Hacksaw Ridge and 1998’s Saving Private Ryan.

Johnson said: “The scripts are being written telling my whole life story.“There are a few names of actors that are in the hat: Idris Elba, John Boyega and John David Washington. I am so honoured to be able to share my story.”

The film will also tell how Johnson as a teen got “on the wrong tracks” and was involved in petty crime, before signing up for the Army, his extraordinary heroism where he risked his life twice to save his colleagues in Iraq and battle back from the brink of death after his skull was shattered by a rocket-propelled grenade.

Johnson will meet the stars personally and be on set through filming – although he hasn’t decided if he will make a cameo appearance.

He said: “When we were sitting in the boardroom with the top, top people from the movie industry one turned around and said: ‘For the actors to be able to sit down with you and hear what happened first hand is mind-blowing’.”

Wife Mallissa added: “I can very much see Ayden (their eight-year-old son) being suitable for the role of playing Johnson as a child because of his age and personality, but we’ll just have to wait and see.

“For myself, I have lots of favourite actresses but Halle Berry playing me would be one that I’d watch over and over again.”

But both admit their children keep their feet firmly on the ground.

As when Johnson asked eight-year-old son Ayden if he would like to make an appearance in the film – his initial response was worthy of any A-lister.

Johnson laughed: “He initially said: “I’ll get back to you”.