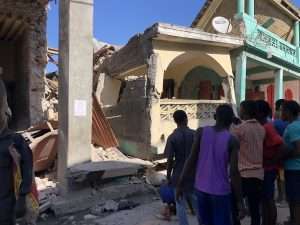 (CMC) – The Directorate of Civil Protection (DPC) in Haiti says the death toll from the August 14 earthquake has risen to 2,207 with 344 others missing and presumed dead.

In a brief statement, the DPC said that the number of people injured by the 7.2 magnitude earthquake had reached 12,268.

“New bodies were found in the south. The human toll for the three departments now stands at 2,207 dead,” the DPC said, adding that fewer and fewer people or bodies have been taken out of the rubble in recent days.

But it said that the search and rescue operations were continuing, especially in the town of Les Cayes, and that the hope of finding survivors was dwindling by the hour.

On Sunday, 24 people, including four children who had been reported missing, had been found alive. The DPC said that they were stuck at Pic Macaya in the Massif de la Hotte and were helicoptered to Camp Perrin.

Hospitals and health centres, still functional in the three affected departments, are working to the limit of their capacity. They are waiting for reinforcements in personnel and equipment. An urgent need for blood is particularly reported at the Sainte Thérèse hospital in Petit Trou de Nippes, the DPC said.

The Barbados-based Caribbean Disaster Emergency Management Agency (CDEMA), which is coordinating the Caribbean Community’s response to the disaster, said in its latest bulletin on Sunday night that the “death toll continues to rise post-earthquake impact on Haiti.”

It said the Haitian government, which has declared a one month state of emergency, continues to strengthen its aid delivery strategy to the region of the south and that “in an effort to improve coordination related to relief supplies from donors, partners are requested to make prior contact with Haiti to give advance notice to the Logistics Unit to facilitate planning”.

CDEMA also reported that buildings in the south, weakened by the earthquake, collapsed after the aftershock of magnitude 4.85.

CDEMA said that search operations are expected to conclude this week and recovery operations will commence this week.