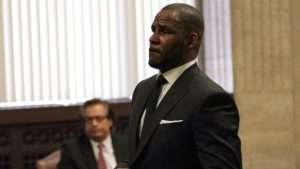 (AFP) — Prosecutors described R Kelly as a “predator” who used his fame to groom minors for sex, as an accuser told the opening day of his much-anticipated New York trial Wednesday the disgraced R&B star used to slap her for violating his “rules”.

The Grammy-winning artist — wearing a grey suit, purple tie and glasses — sat silently, his head down at times as the prosecution laid out a pattern of violent abuse inside the Brooklyn federal courtroom.

Assistant US Attorney Maria Cruz Melendez described Kelly as “a man who for decades used his fame, his popularity and a network of people at his disposal to target, groom and exploit young girls, boys and women for his own sexual gratification”.

The 54-year-old is charged with racketeering, sexual exploitation of a child, kidnapping, bribery and forced labour between 1994 and 2018.

He denies the charges, but faces between 10 years and life in prison if convicted on all counts.

The trial, expected to last a month, finally got underway after a delay of more than a year caused by the coronavirus pandemic.

The government’s first witness, identified as Jerhonda, said Kelly would film their sexual activity when she was 16, below the age of consent.

The now-28-year-old said the musician said he was going to “train me how to please him sexually”.

Her testimony came after prosecutor Melendez said Kelly’s celebrity status meant he “had his pick of young fans” and that he hoarded his victims “like objects”.

During opening statements, she said he used “every trick in the predator handbook,” approaching minors, grooming them and their families with promises he could help their careers before sexually abusing them.

Melendez added that the singer used bodyguards, drivers, runners, lawyers and accountants to cover up crimes.

He bribed his victims by photographing and filming them having sex with him and then threatening to release the tapes, she said.

Kelly “exacted cruel and demeaning punishments” to those who violated demands, including “violent spankings and beatings,” the prosecutor added.

Despite the unsettling claims and several out-of-court settlements, the singer known for hits like “I Believe I Can Fly,” “Bump ‘N Grind” and “Ignition (Remix)” maintained a staunch fan base, continuing to tour worldwide.

His career began to crumble in January 2019 after the release of the explosive docuseries “Surviving R Kelly,” which renewed focus on the R&B luminary’s checkered history in a post-#MeToo era.

The New York trial is the first to put Kelly on the stand in connection with a raft of indictments, including sex crimes cases in Chicago and Illinois.

Kelly is accused of operating a crime ring that systematically recruited women and young girls for sexual relations, locking them in their rooms at hotels when he was on tour, instructing them to wear baggy clothing when not with him, “to keep their heads down” and to call the singer “daddy”.

Many of the “recruits” were under 18 years old, say prosecutors, who among other allegations say Kelly’s “enterprise” facilitated sex without disclosing herpes the singer had contracted.

The indictment also says part of the ring’s job was to isolate girls and women, and make them “dependent on Kelly for their financial well-being”.

The prosecution’s case centres on six unnamed women, including the singer Aaliyah, who died in a plane crash at age 22 in 2001.

The indictment alleges that Kelly paid an Illinois government employee in 1994 to obtain a fake ID to marry an underage Aaliyah when she was 15 and he was 27, a union that was later annulled.

Opening for the defence, attorney Nicole Blank Becker said the victims were aggrieved groupies who consented to sex before becoming “spiteful” after the relationships ended.

“He didn’t recruit them. They were fans, they came to Mr Kelly,” she said, adding some of the relationships were “beautiful” and “long-term”.

A jury of seven men and five women will decide Kelly’s fate.