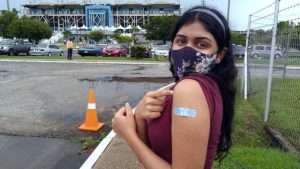 (CNC 3) – Hundreds of young people started lining up outside the Mass Vaccination site at Ato Boldon Stadium in Couva from as early as 6:30 am to get their Pfizer vaccine against COVID-19.

Fazad Mohammed, head of Corporate Communications at Proman, the corporate entity running the Mass Vaccination Site, said vaccination of young people would continue at the site until next week, based on the supplies released from the Ministry of Health.

Despite the long lines of vehicles at the site, Commander Garvin Heerah said everything was under control

“We have a large turnout, a lot of students with their parents are coming through, but it is being managed and managed quite well with this system we have here. We have so far aimed at vaccinating 1,000 people, but we may do more than that,” he told Guardian Media.

Despite the heavy rains, young people said they were excited to get the jab. Many said they want to return to the classroom environment and noted that online classes are not as beneficial as going to school.

Kalisa Ramsubagh, 17, who attends the Naparima Girls High School, was accompanied by her father PC Ramsubagh for the jab. Kalisa said she wanted the vaccine.

“You could be at risk to other people who are vaccinated and to those who are more at risk to chronic diseases, etc. Most people in hospitals are unvaccinated,” she said.

She said unvaccinated persons who contract the virus would only take up space in the hospital that is urgently needed by persons seeking treatment for cancer and other chronic diseases.

“Being unvaccinated you could also risk the virus being replicated to different variants which we do not want, because we all want to go back to normal,” she noted.

Kalisa said her parents and friends share the same view.

The elder David said: “I am happy that she is getting the vaccine. It allows me to be sure that she is safe, and I am safe, and she could get back out to school.”

After getting the jab, Jaycia said the shot was not painful: “It was like an ants bite.”

Bal Ragoonath also took his daughter Amrita Ragoonath,12, to get the jab. Bal, a resident of Williamsville, said he assured his daughter the vaccine was safe.

Amrita said she was eager to get her SEA results and get back in a classroom.