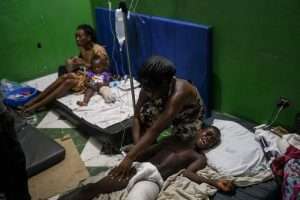 (AP) — More injured victims from Haiti’s deadly weekend earthquake trickled Wednesday into hospitals already overwhelmed with thousands of patients, while bodies are still being found in collapsed buildings five days after the disaster.

On Tuesday night, Haiti’s Civil Protection Agency put the number of deaths from Saturday’s earthquake at 1,941. It also said 9,900 were injured, with many of them waiting outside in stifling heat for medical assistance.

Foreign aid was arriving, but slowly. US Coast Guard helicopter crews concentrated on the most urgent task, ferrying the injured to less-stressed medical facilities.

It wiped out many of the sources of food and income that many of the poor depend on for survival in Haiti, which is already struggling with the coronavirus, gang violence and the July 7 assassination of President Jovenel Moïse.

“We don’t have anything. Even the (farm) animals are gone. They were killed by the rock slides,” said Elize Civil, 30, a farmer in the village of Fleurant, near the quake’s epicentre.

At the public hospital in L’Asile, deep in a remote stretch of countryside in the southwest, people were arriving from isolated villages with broken arms and legs.

“We do what we can, remove the necrotised tissue and give them antibiotics and try to get them a splint,” Fevry said, adding that access to the facility by road is difficult and not everyone can make it.

Mercy Corps, a US-based relief organisation, said about half of L’Asile’s homes were destroyed and 90 per cent were affected in some way. Most public buildings where people would normally shelter also were destroyed.

The countryside seemed to be hit harder by the quake than the cities, and news about what happened there is only now coming out. The obstetrics, pediatric and operating wing at the L’Asile hospital collapsed, though everyone made it out. Despite the damage, the hospital was able to treat about 170 severely injured quake victims in improvised tents set up on the grounds of the facility.

The nearby countryside was devastated: In one 10-mile (16-kilometere) stretch, not a single house, church, store or school was left standing.

The US Geological Survey said a preliminary analysis of satellite imagery after the earthquake “revealed at least 150 landslides west of the town of L’Asile in Département des Nippes and hundreds of landslides in the mountains and south of Beaumont in Department de la Grand’Anse.”

Rain and wind from Tropical Storm Grace triggered more mudslides and forced a suspension of search and rescue efforts, feeding the anger and frustration among thousands left homeless.

Etzer Emile, a Haitian economist and professor at Quisqueya University, a private institution in the capital of Port-au-Prince, said the earthquake’s impacts will almost certainly result in even more long-term poverty for the country’s struggling southwest region. Political instability and gang criminality along the southern roads into the region have particularly hobbled economic activity in recent years.

“The earthquake has just given a fatal blow to a regional economy already on its knees for about two-and-a-half years” Emile said by email.

The disaster will increase Haitians’ dependence on remittances from abroad and assistance from international nongovernmental groups, he said, likely making the country even weaker.

“Foreign aid unfortunately never helps in the long term. The southwest needs instead activities that can boost economic capacity for jobs and better social conditions,” he said.

Kids in Need of Defense, a Washington-based advocacy group for migrant children, called on the US government to halt deportations to Haiti.

The US military’s Southern Command said it was moving eight helicopters from Honduras to Haiti. Three US Coast Guard helicopters have assisted in life-saving transports and moved 17,350 pounds of cargo. A US Navy amphibious warship, the USS Arlington, was expected to head for Haiti on Wednesday with a surgical team and landing craft.