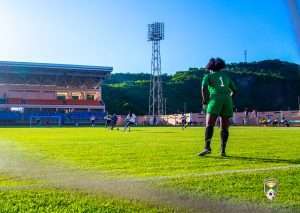 PR – The Grenada Football Association (GFA) is looking forward to a bright future for Women’s Football with  more support and competitions following the conclusion of the Women’s 7-a-side and U15 Tournaments.

Football administrators and coaches are pleased with the talent emerging from the competitions and say  pathways will be created for more women to play the game and develop their skills.

In the final of the Women’s League held at the Kirani James Athletics Stadium, Boca Juniors dominated  their opponents Paradise FCI A winning 7-1, to take home the championship.

Monique George who captured the Golden Boots title scored 4 goals for Boca Juniors (16th, 31st, 47th and 48th minutes), while her teammates Alisha Charles found the net twice in the 8th and 40th minutes and  Sharis Alexander converted in the 62nd minute. Cardisha Rennie was the lone goal scorer for Paradise FCI A in the 27th minute. Queen’s Park Rangers captured 3rd place after their opponents FC Camerhogne did not  show.

Commenting on the League, GFA President Cheney Joseph said he was happy with the level of talent  displayed by the players.

He further stated, “We need to do a lottery system so that we will have more competitive matches,  balance among the teams and more girls will be seen. We are hopeful to go down to U13 and U10 very  soon.”

GFA Women’s Development Officer, Harry Varley, said once a proper structure is put in place, then  women’s football will blossom in Grenada. He said that in the coming weeks “We have the U14 nationals  going away this month, U20s the following month and senior national team matches in October and  November. We have been watching and evaluating their performances and now it’s their chance to  represent Grenada internationally.”

Commenting on the support needed for women’s football, GFA Director and Chair of the Women’s  Football Committee, Renae Samuel said, “When you get players and parents involved earlier, you tap into  the interest, and they develop that passion for wanting to play and specialize in the field.”

Boca Juniors’ Judy McIntosh was awarded the Women’s League Tournament MVP. She expressed her  excitement for the future saying, “My brothers motivated me to play the game and I grew to love it. One  day, I hope to make it a career.”

Monique George also of Boca Juniors netted 31 goals during the Women’s League to capture the Golden  Boot title. She remarked that she wants to go on to represent her country.

The following are the other individual prizes in the league: