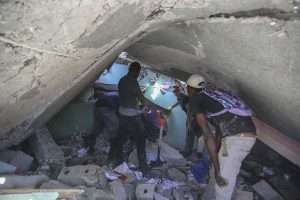 (CMC) — The Barbados-based Caribbean Development Bank (CDB) says it is currently involved in the planning process for a coordinated regional response to provide immediate and longer-term support to Haiti where the death toll from Saturday’s powerful earthquake climbed above 1,200 on Monday.

“We express our deepest sympathy, knowing that the Haitian people have had to continually grapple with natural hazards as well as social and economic challenges over a number of years,” the CDB, the region’s premier financial institution, said in a statement.

It said that through its involvement in the Caribbean Donor Partner Group, led by the Barbados Caribbean Disaster Emergency Management Agency (CDEMA), and co-chaired by the United Nations Development Programme Resident Coordinators Office, it is currently involved in the planning process for a coordinated regional response to provide immediate and longer-term support on the ground.

“Our condolences to the citizens who have lost loved ones or suffered injury or damage to property. The CDB pledges to work with national and regional organisations to assist the recovery and to continue its efforts to improve conditions for the people of Haiti.”

Haiti has declared a month-long state of emergency after the 7.2-magnitude earthquake struck last Saturday morning at around 8:29 am (Local time) leaving at least 1,297 people dead and more than 5,700 injured.

The Directorate of Civil Protection (DPC) said that of the 1,297 fatalities, 1,054 are in the South administrative region, 119 are in Grand’Anse, 122 are in Nippes and two are in the Northwest region.

Prime Minister Ariel Henry said the biggest urgency now is the medical situation in the country.

“We have started to send medications and medical personnel to the facilities that are affected. For the people who need urgent special care, we have evacuated a certain number of them, and we will evacuate some more today and tomorrow,” he added.

Dominica’s Prime Minister Roosevelt Skerrit, speaking on the state-owned DBC radio on Monday, said he was heartbroken by the situation in Haiti, a member country of the regional integration grouping, Caricom.

“Haiti has been going through some very tumultuous situations with the COVID-19 pandemic ravaging Haiti, then you had this political instability for well over a year, then the assassination of the President Jovenel Moise and then here comes the earthquake.

“In this time, no country can sustain these kinds of challenges and certainly Haiti is part of it. Haiti has had its historical challenges. We empathise and sympathise with the government and people of Haiti,” he said, noting that Caricom has already indicated a willingness to assist Haiti in its rehabilitation efforts.

“The Haitian authorities have indicated they are conducting a damage and needs assessment and once that is completed they will indicate to Caricom how Caricom can assist. We are ready to assist Haiti needs all our support, Haiti needs Caricom in particular to lead the efforts to mobilise support for Haiti and we have to guard against Haiti fatigue.

“Haiti has a very important part in our circumstance and we all must continue to speak on its behalf and to see what extent we can mobilise resources for the people of Haiti and once we receive this damage and needs assessment, Dominica in its usual small way will contribute to that Caricom effort,” Skerrit told radio listeners.

But the UN Office for the Coordination of Humanitarian Affairs said on Sunday following a reconnaissance mission to the affected areas that there had been “less significant damages than initially expected”.

“The most urgent humanitarian needs are expected to be linked to the provision of medical assistance and water, sanitation and hygiene,” it added.

Meanwhile, the entire coast of Haiti is under a tropical storm watch as a weather system approaches the area.

“The system is expected to produce over Haiti and the Dominican Republic, five to zero inches of rain with isolated maximum totals of 15 inches are expected across the southern terrain areas through Tuesday. This heavy rainfall may lead to flash and urban flooding, and possible mudslides,” the NHC added.