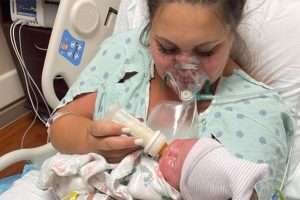 Kristen McMullen, 30, had been battling the virus and pneumonia for two weeks before her death last Friday, according to NBC News.

She delivered daughter Summer Reign on July 27, six days after being initially hospitalized for COVID-19. After the birth she was transferred to the ICU and was eventually placed on a ventilator before succumbing to her illnesses, the outlet said.

“That first week, honestly, Kristen’s main concern was Summer and just making sure that she was OK,” her aunt Melissa Syverson told the network.

“She never got sick, and we assumed like many people that this would just go away just as quickly as it came,” uncle James Syverson reportedly said. “Because with a lot of younger people — she was only 30 years old — that she would breeze through it and be back taking charge of life.”

The Syversons said baby Summer is healthy and “definitely bringing joy” to the devastated family, including Kristen’s widowed husband Keith, according to the article.

They reportedly did not specify if McMullen had received a COVID-19 vaccine.

“We personally feel that whether a pregnant woman is or isn’t [vaccinated] or whether they wear a mask or don’t wear a mask, we feel like they’re at a huge risk potentially for it to be deadly for them or their baby,” Melissa Syverson said.

On Wednesday, the CDC once again urged pregnant women to get jabbed, citing data showing 2,500 women had no increased risk of miscarriage if they received at least one dose of the Pfizer or Moderna vaccine before 20 weeks of pregnancy.

Federal officials said less than a quarter of pregnant women in the US have received at least one dose, far fewer than the 71 percent of American adults who have had at least one shot.