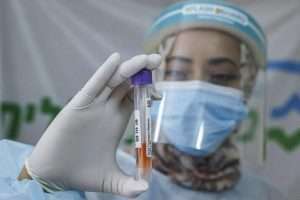 (AFP) — The World Health Organization on Wednesday announced major international trials of three drugs to find out whether they improve the condition of hospitalised COVID-19 patients.

Artesunate, imatinib and infliximab will be tested on thousands of volunteer patients in more than 600 hospitals in 52 countries.

Artesunate is a treatment for severe malaria; imatinib a drug used for certain cancers and infliximab a treatment for immune system disorders such as Crohn’s and rheumatoid arthritis.

The coordinated research across dozens of countries allows the trial to assess multiple treatments using a single protocol, thereby generating robust estimates on the effect a drug may have on mortality, including moderate effects, said the WHO.

The drugs were chosen by an independent expert panel for their potential in reducing the risk of death in hospitalised COVID-19 patients.

They were donated for the trial by their manufacturers and are already being shipped out to the hospitals involved.

The testing of artesunate, imatinib and infliximab on COVID-19 patients is the second stage of the WHO’s Solidarity hunt for effective treatments against the killer disease.

Previously, four drugs were evaluated by the Solidarity trial, involving almost 13,000 patients in 500 hospitals across 30 countries.

The provisional results issued in October showed that remdesivir, hydroxychloroquine, lopinavir and interferon had little or no effect on hospitalised patients with COVID-19.

The final results are due out next month.

“We already have many tools to prevent, test for and treat COVID-19, including oxygen, dexamethasone and IL-6 blockers. But we need more, for patients at all ends of the clinical spectrum, from mild to severe disease,” Tedros told a news conference.

The WHO COVID-19 Therapeutics Advisory Group recommended evaluating the anti-inflammatory properties of artesunate, which has been extensively used in the treatment of malaria and other parasitic diseases for more than 30 years, and is regarded as being very safe.

Meanwhile, infliximab has shown favourable efficacy and safety in restricting broad spectrum inflammation, including in the elderly populations who are the most clinically vulnerable to COVID-19.

The novel coronavirus has killed at least 4.3 million people since the outbreak emerged in China in December 2019, according to a tally from official sources compiled by AFP, while nearly 204 million cases have been registered.

Lamenting that the 200 millionth known case came just six months after the 100 millionth, Tedros said the real number of cases was “much higher”.

“Whether we reach 300 million, and how fast we get there, depends on all of us,” the UN health agency chief said.

“At the current trajectory, we could pass 300 million reported cases early next year. But we can change that. We’re all in this together, but the world is not acting like it.”

The WHO has consistently decried the drastic imbalance between rich and poor countries in access to COVID-19 vaccines.