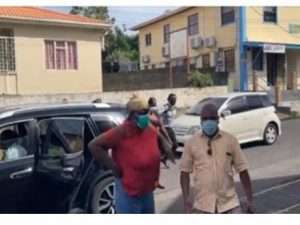 Cops outnumbered the crowd as Lewis arrived in an unmarked police vehicle before being escorted into the building.

Superintendent Hesran Ballantyne told the Caribbean Media Corporation that the police presence was to ensure law and order during the court proceedings.

“I am here with a damaged spine and I have to be up and down with my mother,” she cried, adding that despite her medical condition, she had to show her support for her mother.

Superintendent Clauston Francis warned her to be quiet given that she was in the precinct of the court and her behaviour would not be tolerated.

He told her that if she persists, she would be arrested for breaching the Public Order Act.

Lewis’ younger sister, Janneemay Lewis, sobbed as she attempted to console her niece.

When the matter was called before Senior Magistrate Rickie Burnett, the accused pleaded not guilty to the charge that on August 5, at Kingstown, she unlawfully and maliciously wounded Gonsalves.

Her attorneys, led by Kay Bacchus-Baptiste, requested bail, telling the court that the prosecution had no objections to the person who would serve as surety.

Director of Public Prosecution, Sejilla McDowall, confirmed that she had no objection to bail.

The magistrate set bail at EC$3,000 with one surety and adjourned the matter to September 15.

Bacchus-Baptiste has requested full disclosure in the matter, with McDowall telling the court “we will comply as standard”.

The magistrate ordered disclosure by August 31 and kept the September trial date.

Bacchus-Baptiste later told reporters that Lewis’ legal team was ready with its defence even though it had not seen all of the disclosure as yet.

“I even see it as an abuse against women because the police know that they have the wrong person but yet they forced her to confess and then to bring this stupid charge against her. We will defend her,” said Bacchus-Baptiste, a member of the main opposition New Democratic Party (NDP), which, along with two trade unions, had staged last Thursday’s street demonstration when Prime Minister Gonsalves was injured and had to be flown to Barbados for further medical treatment.