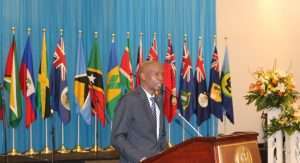 (AFP)— After weeks of struggling to fill the job, a senior magistrate in Haiti on Monday announced that a judge has been named to lead the probe into the assassination of president Jovenel Moise.

The dean of the Court of First Instance in Port-au-Prince, Bernard Saint-Vil, said that Judge Mathieu Chanlatte was chosen for the job.

Chanlatte “will not be intimidated,” said Jean Wilner Morin, president of the National Association of Haitian Magistrates.

“It is an investigation that will take time. We also hope that the authorities will put all the necessary resources at the disposal of magistrate Chanlatte and will also ensure his safety,” Morin said.

A hit team burst into the presidential residence on July 7 and shot Moise dead. His wife Martine was wounded but survived.

Human rights defender Pierre Esperance said he hoped that Chanlatte would treat the case “with the law as a compass, without falling into political persecution.”

Minister of Justice and Public Security Rockefeller Vincent said that his ministry would take all measures necessary to guarantee the safety of judges as well as courtroom evidence.

Police say they have arrested 44 people in connection with the killing, including 12 Haitian police officers, 18 Colombians who were allegedly part of the commando team, and two Americans of Haitian descent.

The head of Moise’s security detail is among those detained in connection with the plot allegedly organized by a group of Haitians with foreign ties.

Moise had been ruling the impoverished and disaster-plagued nation by decree, as gang violence spiked and COVID-19 spread.

Police have issued wanted-persons notices for several other people, including a judge from Haiti’s highest court, a former senator and a businessman.