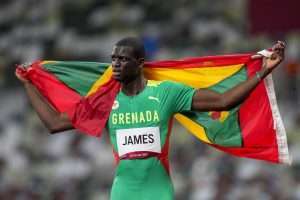 PR – Adam Stewart, Executive Chairman of Sandals Resorts International has extended a complimentary luxury included vacation to Kirani James as he joins Grenadians and the world in celebrating James’ performance in the 400-metre final at the Tokyo Olympics.

In an early morning social media post, Stewart made the announcement while congratulating  the Caribbean’s 400-metre bronze and gold champions. The Chairman lauded both gentlemen stating that it was a “World’s Best performance by Steven Gardiner of The Bahamas and Kirani James of Grenada” and continued that “As the Caribbean’s resort chain that has also been voted World’s Best, when the Olympics are over, we got you with complimentary vacations in full VIP style back home.”

Since the start of the Tokyo Olympics, Stewart has been gifting complimentary all-inclusive stays to Caribbean athletes who achieve podium finishes, to include luxury ground transfers from their homes if applicable, full Butler service and accommodations in a top suite at a Sandals Resort, for a number of nights that would be determined by the athletes themselves.

Stewart added, “Our athletes are amazing, and they are doing a spectacular job continuing to represent themselves, their individual countries and the entire Caribbean region.”

On the ground in Grenada, Acting General Manager for Sandals Grenada Resort O’brien Heron and his team shared in the excitement, “Grenada continues to be inspired by Kirani James. Kirani exemplifies what it means to be resilient and has done an outstanding job waving the Grenada flag during these unprecedented times. Team Sandals is more than ready to roll out the red carpet for our stars.”