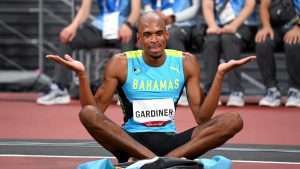 Gardiner, the current world champion over the distance, crossed the line in 43.85 seconds.

World record holder Wayde van Niekerk’s reign as defending champion was over when the South African, who has struggled with injury over the past five years, finished fifth in the semi-finals on Monday.

In his absence, Gardiner produced a superbly balanced race, holding back as James and American Michael Norman went out hardest and then reaping the rewards as he stretched clear in the home straight.

“When the gun went off I stumbled a bit coming out but I recovered, I kept it moving, and with 200 metres to go I started to push a little bit. And 100 metres to go, I gave it all I’ve got,” Gardiner said.

“I came across the line and saw my name on the big screen and I was in first place. I’m just happy.”