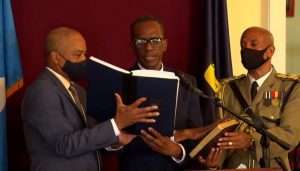 (CMC) – Phillip Joseph Pierre was sworn in as the 12th Prime Minister of St Lucia, since independence in 1979, seeking the “divine intervention in fulfilling the hopes and aspirations of the people of St Lucia”.

Pierre, 66, an economist/accountant, led the St Lucia Labour Party (SLP) to a convincing victory in Monday’s general election, winning 13 of the 17 seats that were at stake in the National assembly.

The United Workers Party (UWP) which held office until then, won only two seats, down from the 11 it enjoyed in the last parliament with the other two seats going to independent candidates, including former Prime Minister Stephenson King.

“This is the start of a new beginning,” an emotional Pierre told the nation at the ceremony held at the official residence of the Governor General, Sir Neville Cenac, on the Morne, overlooking the capital and broadcast live across the island.

” As your servant leader, I shall serve all the citizens of the country regardless of their social class or station in life. The task ahead will not be easy, but together with my team and able and experienced men and women we will deliver to the people of St Lucia,” said Phillip, who served as deputy prime minister in a previous SLP administration headed then by Dr Kenny Anthony during the period 2011-16.

“I ask for your patience in the coming weeks and months as we try to assess the state of the country’s financing and capacity to deliver early as possible, the commitments made to the people of St Lucia,” Pierre said.

During the election campaign, Pierre, who led the SLP for the first time into a general election, said that St Lucia, had over the past five years, become the most indebted island within the sub-regional Organisation of Eastern Caribbean States (OECS).

“It gives me no pleasure to report that among countries in the Eastern Caribbean Currency Union (ECCU) our country has suffered the biggest economic decline, 23.8 per cent for the year 2020. The country’s level of public debt has ballooned under this UWP government to almost four billion (dollars) (One EC dollar=US$0.37 cents) again the highest among countries within the ECCU.

In his address after being sworn in, Pierre said “St Lucia we cannot fail. I will not fail you.”

“I thank you for the opportunity to serve. I won’t do it alone. I will seek the counsel of the wise and if you stand firm with me, together we shall not fail,” he added.

Pierre said that the victory of his SLP on Monday was as a result of the voters “peacefully registering their voice, not only in support for me, but for the party and against the things you thought were wrong, or the direction we were heading”.

He acknowledged that while not everybody voted for him and the party, “thankfully the majority were of a particular view and that is the country needed to be rescued from the abyss into which it was plunging”.

“The majority of you accepted my offer to lead that rescue mission,” he said, adding that the team that contested the polls, represented a blend of youth and experience and that the full rescue team would also include “you the people”.

“I promise to be Prime Minister, not for some of the people, but for all of the people. The St Lucia Labour Party has won the general election. However, we now have to manage an inclusive, equitable and just society.

“I believe that our island can be one where dignity of the human person is preserved and respected, where our citizens are treated equally and given the opportunity to grow and achieve their full potential, where the poor and less fortunate and vulnerable members of our society are protected and assisted by the government to achieve a decent quality of life,” said Pierre, who broke down while remembering his late parents, a policeman and a teacher, as well as his brother, who died recently.