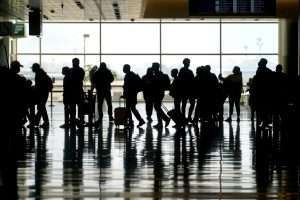 (AP) — The United States served notice Monday that it will keep existing COVID-19 restrictions on international travel in place for now due to concerns about the surging infection rate because of the delta variant.

It was the latest sign that the White House is having to recalibrate its thinking around the coronavirus pandemic as the more infectious variant surges across the US and a substantial chunk of the population resists vaccination.

It was also a reversal from the sentiment President Joe Biden voiced earlier this month when he said his administration was “in the process” of considering how soon the US could lift the ban on European travel bound for the US after the issue was raised by German Chancellor Angela Merkel during her visit to the White House.

“Driven by the delta variant, cases are rising here at home, particularly among those who are unvaccinated, and appears likely to continue in the weeks ahead,” she said.

The rising cases also are causing the administration to take a closer look at policies on wearing masks.

On Monday, the Department of Veterans Affairs became the first major federal agency to require its health care workers to get COVID-19 vaccines. And over the weekend, US health officials acknowledged they’re considering changing the federal government’s recommendations on wearing masks.

The delta variant is a mutated coronavirus that spreads more easily than other versions. It was first detected in India but now has been identified around the world. Last week, US health officials said the variant accounts for an estimated 83% of U.S. COVID-19 cases, and noted a 32 per cent increase in COVID hospitalizations from the previous week.

The rise in cases has prompted some state and local officials to reinstate masking guidance, even for vaccinated Americans.

The White House follows the Centers for Disease Control and Prevention guidance released in May, which states those who are unvaccinated don’t have to wear masks indoors. They’ve thus far made no changes to Biden’s public events, and the president is still traveling the country and participating in events unmasked.

But Dr Anthony Fauci, the nation’s top infectious disease expert, said on CNN’s State of the Union this Sunday that recommending that the vaccinated wear masks is “under active consideration” by the government’s leading public health officials.

“We’re going in the wrong direction,” Fauci said, describing himself as “very frustrated.”

The surge in the delta variant poses a major political challenge for Biden, who called it a “great day” for Americans when the CDC released its relaxed masking guidance in May and on July 4 declared that “the virus is on the run and America is coming back.” He’s spent the past few months shifting his focus from dire warnings to Americans to get vaccinated to public events pitching his infrastructure, education and jobs proposals, which are currently in the middle of fevered negotiations on Capitol Hill.

The administration has touted strong economic growth as fears about the pandemic waned, states relaxed their coronavirus restrictions and their economies opened back up. But the surging delta variant risks undermining that economic progress and drawing Biden’s attention away from his domestic agenda and Democratic Party priorities like gun, voting and policing reforms, back to the risks posed by the coronavirus pandemic.

It could also highlight one of the administration’s greatest struggles thus far: The sluggish vaccination rate nationwide. As of Sunday, 69 per cent of American adults had received one vaccination shot, according to the CDC — still slightly below the 70 per cent goal Biden had set for July 4. Sixty percent of Americans have been fully vaccinated.

When asked Monday if he had confidence he could get unvaccinated Americans to get the shot, Biden said, “we have to,” but ignored a follow-up question on how. And prior to the VA’s announcement, White House press secretary Jen Psaki skirted questions from reporters on why the administration hadn’t yet issued its own vaccination mandates for healthcare workers, deferring to the CDC for guidance and hospitals and healthcare associations on the ultimate decision.

Psaki acknowledged that the administration runs the risk of undermining its vaccination goals by further politicizing an already fraught issue if the president becomes the face of vaccine mandates.

“The president certainly recognises that he is not always the right voice to every community about the benefits of getting vaccinated, which is why we have invested as much as we have in local voices and empowering local trusted voices,” she said.

Still, it’s clear the administration is taking steps to address the continued impact of the pandemic.

Biden announced Monday that those Americans dealing with so-called “long COVID” — sometimes debilitating side effects caused by the illness that last for months after the initial infection — would have access to disability protections under federal law.

“These conditions can sometimes, sometimes, rise to the level of a disability,” he said, adding they’d have accommodations in schools and workplaces “so they can live their lives in dignity and get the support they need.”

And the CDC advised Americans against travel to the United Kingdom this past Monday given a surge in cases there.

Most of continental Europe has relaxed restrictions on Americans who are fully vaccinated, although the United Kingdom still requires quarantines for most visitors arriving from the US Airlines say, however, that the lack of two-way travel is limiting the number of flights they can offer and seats they can sell.

But the rise and prevalence of COVID-19 variants in Europe, especially the delta mutation, has caused the Biden administration to tread slowly about increasing transatlantic travel.