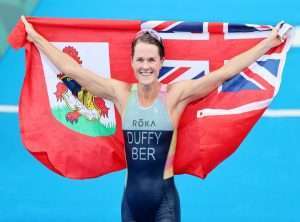 (AFP)— Flora Duffy made Olympic history on Tuesday, winning the women’s triathlon in Tokyo to give the tiny island of Bermuda their first-ever gold medal.

Duffy’s success makes Bermuda the smallest nation in terms of population — around 70,000 — to ever win a medal at a Summer Games.

For Duffy it was a welcome reward after persistent injuries and a diagnosis of anaemia in 2013.

She quit the sport after failing to finish the event at the 2008 Beijing Games and started working in a shop in Bermuda before eventually returning to the sport after studying for a degree.

In a race delayed by 15 minutes because of slippery conditions following heavy overnight rain, Duffy took control in the final running section.

She had opened up a lead of almost a minute after the first of four laps and was never under threat from then on.

The broad grin she sported entering the finishing straight gave way to tears at the realisation of what she had achieved as she crossed the line.

Taylor-Brown looked proud as she overcame the frustration of suffering a flat rear tyre in the cycling section of the race.

That misfortune left her 22 seconds off the lead quartet at the beginning of the running section but she quickly made up the lost ground.

Bermuda’s only previous Olympic medallist was boxer Clarence Hill, who won a bronze in 1976.