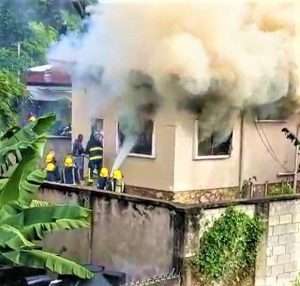 (TRINIDAD EXPRESS) – Three children died after being trapped in a burning house in Maraval this morning.

The victims have been identified. They are aged 17, six and three.

They lived in a house near the parking lot of the RBC Bank at Rookery Nook, Maraval.

Witnesses reported seeing more than three children inside the first floor of the burning house, and that at least three got out with an adult.

The other children were trapped in an area of the house where there was a locked burglar proof door leading to the steps.

Before fire fighters arrived, a man tried breaking through the walls of the house as it filled with thick black smoke and the screams of the victims could be heard.

Fire fighters spent several minutes with a sledge hammer breaking through the burglar proofing, while water was sprayed through the windows.

The cause of the fire is not immediately known but police said that it did not appear to be maliciously set.