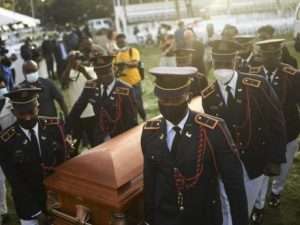 (AP) — The body of slain Haitian President Jovenel Moïse was returned to his hometown Friday for a private funeral amid heavy security following violent protests and fears of political volatility in the Caribbean nation.

Martine Moïse arrived to cries of “Justice! Justice!” as she headed straight to her husband’s casket, climbing the stairs and stopping in front of it.

Her right arm in a sling, she lay her left arm on the casket and then brought it to her heart as she stood there in silence.

Her eyes filled with tears as her three children joined her.

Minutes later, a group of supporters grabbed a large portrait of Moïse and paraded with it as the police band began to play the national anthem over loud wails.

As the ceremony began, hundreds of protesters clashed with police outside the private residence.

Shots erupted and tear gas and black smoke wafted into the ceremony.

Protesters’ cries carried over religious leaders speaking at the funeral.

Haitians clad in sombre suits, shiny shoes and black and white formal dresses shouted and pointed fingers at the neighbouring seating platforms where Haitian officials and foreign dignitaries sat above at least a dozen men with high-powered weapons.

“You didn’t take any measures to save Jovenel! You contributed to his killing!” one woman yelled.

On the grounds below, one Moïse supporter threatened Charles: “You need to leave now or we’re going to get you after the funeral!”

Moïse’s body arrived shortly after dawn at his family’s seaside property where the funeral is being held.

Six officials carried the brown casket up a stage where they saluted it and stood before it in silence for several minutes before draping a large red and blue Haitian flag over it.

Before the funeral began, a man wrapped himself in a large Haitian flag and approached the casket, crying out, “We need to fight and get justice for Jovenel!” Next to him, a man carrying a T-shirt commemorating Moïse joined in as he yelled, “Jovenel died big! He died for me and for the rest of the country…We’re not going to back down.”