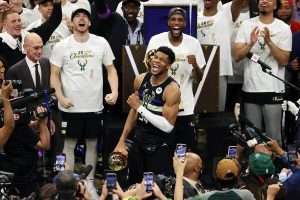 (NBA) – Giannis Antetokounmpo had himself a Finals for the ages.

In the 2021 NBA Finals, Antetokounmpo led the Milwaukee Bucks over the Phoenix Suns to capture the franchise’s first championship in 50 years. He earned Finals MVP in the process, with averages of 35.2 points, 13.2 rebounds, 5.0 assists, 1.8 blocks and 1.2 steals while shooting 61.8 percent from the field over the six-game series.

Antetokounmpo made a lot of history along the way, from joining Shaquille O’Neal in the record books with back-to-back 40-point, 10-rebound games early in the series to having one of the highest scoring games in Finals history in the title-clincher.

To put Antetokounmpo’s series into perspective, he finished the Finals with a Game Score – an all-encompassing box score metric created by John Hollinger that gives “a rough measure of a player’s productivity for a single game” – of 31.9.

Want to guess where that ranks all-time? If the title didn’t give it away: No. 1.

To recap what Antetokounmpo did in the 2021 NBA Finals:

Whether or not we just witnessed the greatest Final series ever by a single player is up for debate, but Antetokounmpo has at least worked his way into the discussion.