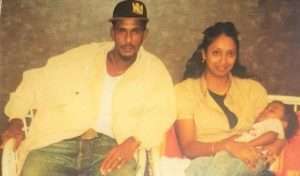 (TRINIDAD EXPRESS) –  Last Tuesday afternoon, when prisoners at the Maximum Security Prison in Arouca were let out of their cells to get dinner, inmate Basil Gobin stayed behind.

In the ten minutes his cellmates took to return, Gobin attempted suicide in his cell.

Gobin still had a pulse when they took him to the Arima Hospital where he died.

It was a day before he was to appear virtually before a Master of the Supreme Court in preparation for his trial for a murder committed more than a decade earlier.

Instead, relatives of the woman he was accused of murdering say he took the coward’s way out, avoiding the courtroom and his accusers, and leaving the State with one last bill to pay—for his funeral.

They have no intention of spending money on that.

It turns out that last week was Gobin’s third, and this time successful, attempt at suicide.

But the Express could find no one connected with his case who mourned his death or offered a testimonial of his previous “good character”.

The evidence against Gobin, a Guyanese national, was overwhelming, the Express was told.

He stalked, tortured and killed the wife he had abused for years, leaving their two-year-old son to be raised by relatives.

Nyla Khan, 24, had kept the abuse secret for years until she told her mother and brothers and moved out of the house, located down the street from the Rio Claro Police Station where she had lodged several reports…in vain.

She took her son and moved in with relatives. One Saturday in December 2009, Khan, who worked as a supermarket merchandiser, went back to the house to collect clothing for her son.

She had purchased a pizza and carried it into the house after getting out of a taxi.

The evidence is that Basil Gobin was waiting, hiding in the ceiling above the living room. When she came in, he dropped down upon her like a monster in a horror movie.

He used a hatchet to knock her out in the house which had been given to the couple by Khan’s mother as a wedding gift.

He would later confess to her relatives that long after she was almost beheaded, he tied and tortured her, her screams muffled by duct tape across the mouth.

When she failed to come home, her mother Nazimool started calling. No answer. So the mother took a seven-year-old nephew to the house to find her the morning of December 13.

“The door to the front room was open, but the porch was locked. My mother pushed my nephew through the porch and he went inside. He saw her in a pool of blood and came back and told my mom who called the police,” the Express reported back then.

Also found in the house were the Christmas decorations, toys and the pizza she had promised her child, whose name the Express will not use.

Basil Gobin fled but didn’t go far. He was a mason working on the State housing project two kilometres away and that was where he hid.

Khan’s family believe he was in the bushes at the back of the house the day of her funeral when her eyes and nose were the only parts of her body visible to mourners. But they were enough for her two-year-old son to recognise his mother. He called out to his mummy, but there was no answer. He then cried himself to sleep, the Express reported.

Gobin would torment the family for 40 days.

He would come close to the house and watch them, calling out to his mother-in-law, sharing details of what he had done, where he had chopped Khan, why, how he had tied her.

He would call the family on the phone and ask about his son.

When the police finally figured out how to track Gobin’s call to the hideout, they arrived to find him trying to kill himself.

A stay at St Ann’s Psychiatric Hospital found him competent to be charged. He would attempt suicide a second time, while in prison awaiting the hearing of his case.

“Maybe it was playing on his mind, the guilt,” Khan’s niece Aleema Mohammed told the Express.

At the time of his suicide death, he had been committed to stand trial and was awaiting a court date. Eleven years is not an extremely long time to wait for a trial to start in Trinidad and Tobago.

About their son, Mohammed told the Express: “He is doing as well as he can. He keeps his mother’s pictures hidden away. He would sometimes look at them and cry, asking his grandmother questions she can’t even answer. Therapy never helped.”

Khan’s mother is relieved. She had feared that if Gobin was freed at trial, he would come right back for his son, since he had no known relatives in Trinidad, and no one could say where in Guyana he originated.

The mother said to her loved ones: “I buried my daughter. I don’t want to have to bury her murderer too.”

The family has cared well for Khan’s now orphaned son, a secondary school pupil who helps the family plant crops.

The boy, now 14 years old, was selling “dasheen bush” at a stall outside the family’s home last Wednesday when a man stopped.

The boy thought it was a customer. It was a Prison Service welfare officer who had come looking for Basil Gobin’s next of kin.

The message the boy got was that he had killed himself in jail.

The boy wept, and ran to his grandmother.

Prison Commissioner Pulchan said that if no one claimed Gobin’s body, “we have a system where the Friendly Society (association) will accept and dispose of the body”.