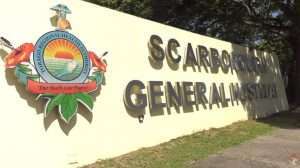 This came to light when 13 members of a Tobago family were placed in quarantine after one of them, 65-year-old Watson George of Bon Accord, tested posi­tive for Covid-19 last month.

George has since died of the virus.

A sister of the deceased, who wished not to be named, told the Express yesterday that of the 13 family members, six are positive, “which includes my niece and her four children, the four-month-old baby and another niece”.

Outlining the events leading to the death of her brother, she said three weeks ago her brother spent three days at the Scarborough General Hospital after experien­cing problems with his kidneys.

He was later released into the care of his family. “He did not spend a good week; when he came home by the Friday, he started running a high fever, but Fri­day night, he could not breathe properly, a hiccup and a cough. So Saturday morning, bright and early, we had to rush him back to the hospital. When we took him back, by Saturday afternoon, the hospital called to say that he was Covid-19 positive,” she said.

She said the phone call was very distressing for the family, “and on top of that, it’s one call my niece received—‘Your father is positive, you have to quarantine, we would call you back for information’. Nobody called back. We had to reach out to people to get them swabbed, to find out who positive, to know what to do to quarantine”.

George was one of two who passed away from Covid on Monday night in Tobago, increasing the death total during the pandemic to 30. An 84-year-old woman with comorbidities also died.