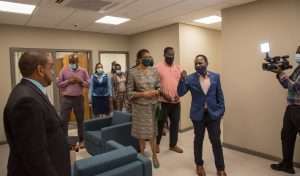 PR – Prime Minister, Dr. the Right Honourable, Keith Mitchell, has  commended the continued improvements to the operation of and services  provided by the National Water and Sewerage Authority (NAWASA) over the  years.

Prime Minister Mitchell commended the board and management team for the  visionary leadership in bringing the project to fruition. He also recognised the  patience and dedication of NAWASA staff as they endured less than ideal  working conditions over the years.

Dr. Mitchell said, “NAWASA’s progress has been slow and steady over the  years. What you witness today in terms of the level of service provided,  comes as a result of years of dedication to growth and excellence. I have  seen the progress first hand and I can attest that what we have today,  represents a far cry from what we had a few decades ago.”

The Prime Minister, a former Minister of Works who had responsibility for the  water company in the 1980’s, encouraged NAWASA to continue delivering  on its mandate to meet the needs of customers across Grenada, Carriacou  and Petite Martinique.

Dr. Mitchell said, “I do believe there is a clear indication of NAWASA’s  commitment to continuous improvements in service to the people of  Grenada, Carriacou and Petite Martinique. The company’s capital works

budget for 2021 shows a projected investment of $14.5 million into various  projects across the country, including the laying of new and replacement  pipes, installation of fire hydrants, construction of roads access to water  treatment facilities and extension of the sewer network to accommodate  more customers.”

He also noted plans to expand the intake at the desalination plant in  Carriacou, a project that will bring tremendous relief to residents there who  have experienced significant challenges with water supply over the years.

Another major initiative currently underway for NAWASA is the $125 million  Green Climate Fund project, which is the single largest investment in the  island’s water sector to date.

The Government of Grenada is also making a significant contribution to this  project which will bring significant upgrades to the country’s water system.  Dr. Mitchell said, “Though the bulk of the financing for the project comes from  the GCF, Government is also making a sizeable contribution of $12.5 million.  This clearly demonstrates our recognition of the need to support further  improvement in NAWASA’s service and at the same time, the wisdom in  embracing an opportunity to build resilience into Grenada’s water supply  system.”

Dr. Mitchell underscored the role of the public in ensuring that NAWASA  continues to be a successful run operation and appealed for the timely  payment of bills.

He also cited continued instances of wastage, particularly at public  standpipes and encouraged more responsibility in the use of this particular  amenity. He recalled a decision by Cabinet some years ago to reduce  standpipes by ensuring more persons have direct access to water at home.  The Prime Minister suggested that the time may be right for another

collaborative effort to further reduce the number of standpipes in operation  across the country.