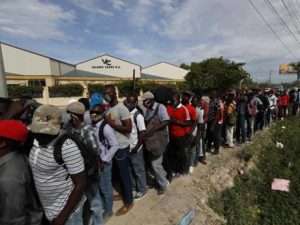 (AP) — Haitians are not only wondering who killed their president, but who’s running the country: At least three men claim to be the legitimate head of government, complicating the investigation into the assassination and fuelling a race to fill the political power vacuum.

Challenges are mounting against interim Prime Minister Claude Joseph, who is ruling Haiti with the backing of lean police and military forces that have long lacked resources.

He has pledged to work with the opposition and allies of President Jovenel Moïse, who was killed Wednesday at his private residence during an attack in which his wife, Martine, was wounded and airlifted to Miami, where she remains hospitalised.

But few are waiting for Joseph’s next steps.

A coalition of main opposition parties called the Democratic and Popular Sector said Tuesday that Haiti lacks a leader: “This is autopilot. This situation must not continue. The country is unfortunately witnessing a proliferation of proposals for exiting the crisis, which further complicates the task.”

The coalition presented its own proposal for the creation of what it called the Independent Moral Authority, which would be made up of human rights activists, religious leaders, academics and others who would be charged with reviewing and merging all proposals.

Also on Tuesday, members of Haiti’s civil society are expected to unveil their own findings “for a Haitian solution to the serious multidimensional crisis that is rocking our country.”

Meanwhile, Ariel Henry, whom Moïse designated as prime minister a day before he was killed, has said he is the rightful prime minister but has been left out of discussions with top government officials.

He has the support of a group of well-known politicians considered Moïse’s allies who recently chose Joseph Lambert, the head of Haiti’s dismantled Senate, as provisional president.

Lambert was supposed to be sworn in Sunday as a symbolic act, but the event was cancelled at the last minute because he said not all his supporters could be present.

Joseph, Henry and Lambert met Sunday with a US delegation that included representatives from the Department of Justice and the Department of Homeland Security who flew to Haiti to encourage dialogue “to reach a political accord that can enable the country to hold free and fair elections,” the White House’s National Security Council said.

White House press secretary Jen Psaki said the delegation received a request for additional assistance, but she did not provide details.

She added that Haiti’s request for US military assistance remains “under review” as she suggested that political uncertainty on the ground was a complicating factor as the administration weighs how to help.

“What was clear from their trip is that there is a lack of clarity about the future of political leadership,” Psaki said.

Haiti is also seeking security assistance from the United Nations, a request that deputy spokesman Farhan Haq said is being examined.

The UN has been involved in Haiti on and off since 1990, but the last UN military peacekeepers left the country in 2017.